Returning to the Chesapeake After Completing the Great Loop

Sometimes a dream takes hold and you never lose it, even if it takes years to come to fruition. This was true for John Bickford, who 35 years ago (well before the existence of the internet) read in a magazine about the Great Loop. “The Loop” as it is known, is a 6000-mile circumnavigation of the eastern portion of North America. The route is primarily comprised of protected waterways and takes boaters through 15 states and Canadian provinces.

John says, “After reading the article, I discussed the idea with my wife, who was 100 percent onboard with the concept. Then, when we retired, after having done many years of reading and research, we started looking for ‘our’ boat. We wanted a vessel that was fairly large because we intended to become full-time liveaboards.

“We had never owned a boat before, but in February of 2014 we purchased a DeFever 44-foot trawler with twin Ford Lehman diesel engines in Palm Coast, FL. After two days with a training captain, we drove the boat back to Maryland, which, in retrospect was clearly not enough experience to be operating such a large boat in unfamiliar waters. On the way home we ran aground once in North Carolina. We wriggled our way off the sand bar, got back in the channel, and made it the rest of the way without further incident. Once we were home, the boat, Catalina Jack, went into a yard for a refit.

“We cruised on the Chesapeake for three years before embarking on the Great Loop from Galesville on May 8, 2018. Without question, the part of the Loop we enjoyed most was every part of Canada, including the scenery and the people. Canadians are happy people, always friendly, always willing to help,” says John.

In several places on the Loop, alternative routes can be chosen. “After going up the Hudson River, more folks opt for the Erie Canal, then the Oswego Canal to Lake Ontario, north across the lake to the entrance to the Trent-Severn Canal which leads to the Georgian Bay of Lake Huron,” says John. “However, we chose to continue north on the Hudson to Lake Champlain, then to Chambly Canal (Québec) down to the Saint Lawrence River. Then it was up the St. Lawrence to Montréal, the Ottawa River to Ottawa, the Rideau Canal southwest to Lake Ontario, then on to the Georgian Bay.”

For many Loopers, the Gulf of Mexico passage is the most intimidating leg of the journey, and it was challenging for the Bickfords. John says, “The Loop requires a challenging overnight 170-mile, 24-hour passage of the Gulf of Mexico from Carrabelle, FL, on the panhandle to Tarpon Springs or sometimes Tampa, although some boaters choose the Big Bend Route that follows the coast. Having waited for a weather window in Carrabelle for five days, we and several other boats left at 10 a.m. About 12 hours later, the waves began to build, and for the next seven hours the seas were very rough. Our 56,000-pound, 44-foot boat was pitching heavily in head seas—badly enough that crawling on hands and knees was the only safe way to get to the head. We could see very little out of the windshield due to the heavy pitching and had to rely solely on radar. Upon arrival in Tarpon Springs we discovered that, during the night, our Boston Whaler type hard-shell dinghy had been slamming against our swim ladder, resulting in enough damage that it was unrepairable.”

John says, “We sold our ‘dirt house’ three years ago and moved aboard full-time. Neither I, nor my wife, have any regrets at all.” After returning to the Chesapeake this summer, the Bickfords are now cruising occasionally on the Bay and are in the midst of some “home improvement” projects while berthed in their home port with access to their vehicles. The couple plans to winter-over in Galesville and will be leaving in mid-June next year to cruise the New England Coast.

John and Gloria Bickford have been members of the America's Great Loop Cruisers' Association (AGLCA) for many years. John says the AGLCA forum is a terrific resource. Read more about the Bickford's Great Loop adventure on their blog, catalinajack.com. 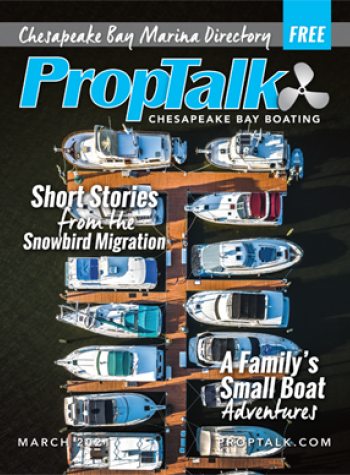