A Father and Son and Their Boston Whaler

This write-up gets personal; it is about a father-son relationship with a Boston Whaler outboard-powered boat, a boat brand that was integral in my relationship with my own son. When he was eight years old, I started a campaign with my wife about why it would be a great boat for him, especially because a Whaler is un-sinkable.

We went to about two dozen boat shows. Together we also read, out loud, numerous ads in the boating magazines. Each time, I highlighted how one could saw a Boston Whaler in half and still be dry and safe within the boat… and with the outboard engine still intact. In fact, the boat could plane off with power, even after being cut up. In some ad photos, the guy even wore a full business suit with dress shoes while doing it.

You could even drastically overload the boat, and she’d still float. Or jump into the boat from a sea wall and take it. The Whaler took ham-fisted balancing on the gunwale without trouble. By the time my son’s 13th birthday rolled around, getting a used Whaler was okay with his mom for a birthday gift. It was a safe and sane idea in her mind. To me it was more than just safe and sane—it also provided some freedom for a young teenager. My sales campaign had worked.

Similarly, the Whaler in this story is a used boat. She is a 15-foot model, built circa 1981. Powered by a 1994 70-horsepower Johnson outboard, she has been fixed up, mildly customized, and given a paint job. The father-son restoration team got some direction from Hank Reiser of Pocahontas Marina in Edgewater, MD, which is located off the South River on the Western shore of the Chesapeake Bay. Hank added some technical knowledge to the project. The father-son team painted their boat a non-stock color. The blue they picked looks great and makes the boat look larger. The red replacement gas tank they installed holds 18 gallons under the helm seating bench. Then they put in a custom steering wheel console/storage area. A battery fits inside this console behind a teak access door. A switch panel for boat wiring was located on a flat panel near the steering wheel for lighting and electrical needs. Custom seat backs—typically a no-no on a small, open Whaler—make for a comfortable resto-mod (restored and modified) version of this 15-foot, three-inch Boston Whaler. Some very nice varnished wood sets off the interior. She is a looker in person. 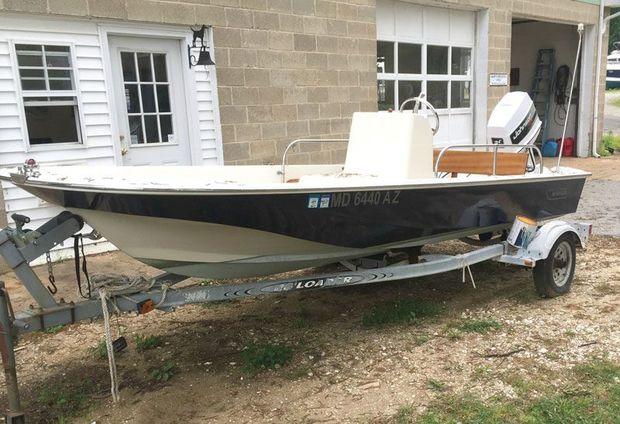 This boat has more than a bit of sweat equity, some very nice paint, good woodworking additions to a used boat, plus a used motor. As a result, the father-son team got themselves a safe boat capable of speeds up to 41-mph. She can be used to waterski, crab, fish, dive, cruise, and go to a marina for dinner in style—a classy but inexpensive way to go boating.

The Boston Whalers line of boats began in 1958 with the 13-footer. That boat established the company in the marine business. It was simple for boat dealers to add a 13-foot Whaler to their inventory, since the other brands that they sold did not offer a comparable model. The 13-foot Whaler set the small-boat world on fire. She was funny shaped, built and constructed in a very different manner, and was supported with a unique advertising plan touting how different the boat was. In 1961 the 16-foot model was rolled out. Again, a different boat. Low-sided, but always ready for ocean inlets, this one could have a bigger console. One could envision commanding a 16-foot Whaler at the helm, while running around the waterways seated in the 13-footer.

Boston Whaler became a four-boat product line in 1970, when the new 19-foot and 21-foot models expanded the model choices. Each Whaler model stands out. The 15-foot especially sits nice and level, even with its 70-hp engines.