On March 25, 1634, European settlers from the ships the Ark and the Dove first stepped foot onto Maryland soil at St. Clement’s Island in the Potomac River; years later we celebrate that anniversary with Maryland Day. 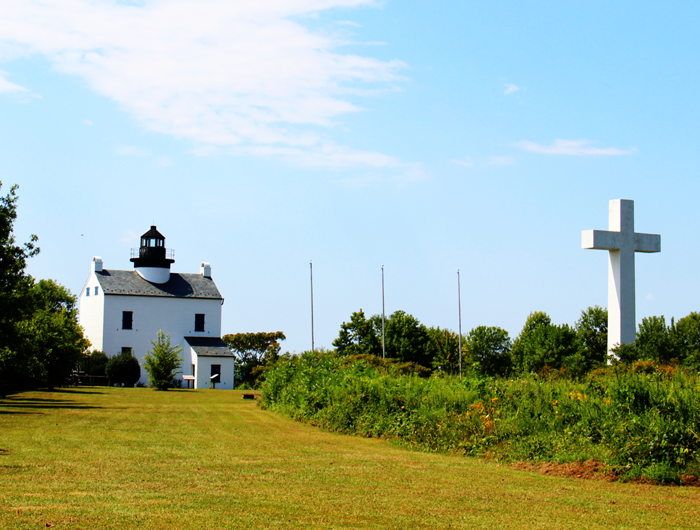 The Ark and the smaller Dove carried an estimated 150 Catholic and Protestant passengers seeking religious tolerance in the New World. The Catholics hoped to escape religious persecution and a European society that marginalized them, both socially and economically. The Protestants, too, sought a better life in the New World and the opportunities it had to offer.

On November 23, 1633, the ships set sail from the Isle of Wight, England, departing on the Feast Day of St. Clement. They entered the Chesapeake Bay on March 3, 1634, and after sailing up the Potomac River, landed on a 455-acre island which they named for Saint Clement, the patron saint of mariners. Before the colony of Maryland was settled, the Protestant King James I of England knighted George Calvert, a Catholic, and made him Lord Baltimore. Calvert requested of the King a land grant in the New World where he, his family, and others seeking religious tolerance could settle. The request was granted and was carried forth by Charles I, James’s son, after his father’s passing.

Charles I decreed that the land would be called Terra Mariae, or “Mary’s Land” after his wife Henrietta Maria. Unfortunately, George Calvert died before he was able to travel to Maryland. His son Cecil accepted the charter and made plans for those who would be making the journey; each adult would be granted 100 acres, each child 50 acres, and indentured servants would receive food and supplies. Cecil’s brother Leonard in turn led the group to the New World.

Before his death, George Calvert decided that the new colony would be a place for Christians of all denominations to practice their faith unheeded. Maryland would separate church and state and would not recognize any one religion over others. The colony of Maryland also recognized Native Americans as a separate people with inherent rights. It was views such as these that would foreshadow the policies put forth in the U.S. Constitution in 1789.

And so today, we celebrate the anniversary of the landing on St. Clement’s Island and the beginning of religious tolerance in the United States with Maryland Day. The island once encompassed 455-acres but has now shrunk to nearly 60. A 40-foot stone cross was erected on the island in 1934 in honor of Maryland’s 300th anniversary. Behind the cross stands an almost exact replica of the Blackistone Lighthouse, which served the mariners of the Potomac River from 1851 until 1956 when it was destroyed by fire. The replica lighthouse was completed in 2008 using the original design plans from 1848.