Breton Bay, just off the Potomac River, is a hidden jewel on the Chesapeake Bay. Travel along the north shore of the lower Potomac River, and it looks like a long line of trees and houses. But, almost hidden in the unvaried shoreline are the beautiful and sheltered waters near Maryland’s first landing site: St. Clement’s Island. The island itself has a public dock and features about 100 acres of open space to stretch your legs and let your pets run. 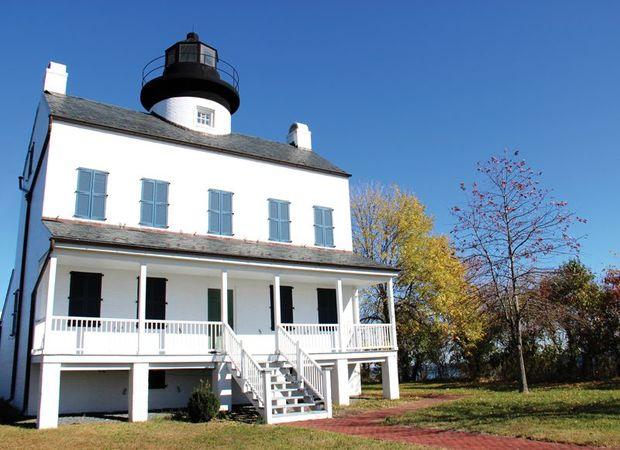 On the south point of the island, standing watch over the wide Potomac is a 40-foot cross and the Blackistone Lighthouse (originally built in1851, burned down in 1956, and rebuilt in 2008). The building is open in season as a museum, and the area, restored as a state park, preserves the location where in March of 1634, travel-weary colonists aboard the Ark and Dove, made Maryland’s first European landfall. There are several interesting plaques arrayed around the property that tell the story of their treacherous journey and the significant events. Have a picnic, pick up sea glass on the beach, and just take it easy. Water taxi service is available on weekends, June through September from St. Clement’s Island Museum.

The Barnacle Cup Sailors run their Saturday regattas around the buoys near St. Clement’s Island. Join in the fun if you’re a sailor. If you’re a powerboater, they could always use a committee boat, and of course they love to show off if you just want to watch the action. From St. Clement’s Island it is an easy leg just to the north into historic and enchanting Breton Bay. Mind the pound nets off Newtown Neck State Park, which borders the western shore and is still pretty much as it was when the colonists arrived. The park gate is near Sir Frances St. Zavier’s Catholic Church, the oldest church in the county, which is still active today.

As you make your way into Breton Bay, on the western side you can stop in at Fitzies Irish Pub and savor a crab-cake sandwich or shrimp basket and an ice-cold beer on tap. They also have fuel and water. The atmosphere is casual, and you can enjoy the Tiki bar with its sandy beach overlooking the expansive water view. If you like to explore, Combs Creek and Cherry Cove just up along the northern shore are nice tributaries in which to putter along at slow speed. The water is a bit shallow at the mouth of each of these inlets, but the channel is well-marked, so most craft have no problem getting through.

Breton Bay is lined with stately homes and manicured properties. The golf course atop the hill is a popular establishment if you plan to stay. It is open to the public, and the club house offers excellent food and beverages. You can sit on the deck, enjoy the view, and watch the golfers tee off. The incredible view from this very spot is the reason my wife and I decided to make Leonardtown our home!

The stately Breton Bay Inn, the venue for many a wedding, is right across the street. Moving further up into Breton Bay, you are sure to see many bald eagles, osprey, and blue herons, and even an occasional dolphin or otter. The wildlife is prolific with breaking schools of rockfish often drawing a cloud of gulls. Medley’s neck, along the eastern coastline, is the location of several lovely homes that grace the shore, one of which often enjoyed visits by Bob Hope.

Summer Camp Maria is alive with youngsters filling the air with excited voices as they discover nature, make memories, play games together, and go canoeing and swimming. A little further up the Bay, past red channel marker 8, in a little horseshoe cove to the right, Maryland Rock Quarry has one of the last remaining barge-served industries in the Chesapeake Bay region. Although it is not used as often as before, you may see a barge loaded with rip rap or gravel plying its trade. Right next door is Abell’s Wharf, a public boat ramp and a favorite of the locals. Paw Paw hollow makes for a very peaceful anchorage.

The fully functioning Bell family farm paints a classic portrait of American life along the gently sloping hills as you near the bend by green channel marker 11. St. Mary’s Ryken High school is perched atop a wooded hill. It is here you may see the school sailing team running a regatta or just getting in some practice.

The county seat city of Leonardtown is a fantastic destination, one that deserves your attention and your time. Be mindful of the tide as you approach, and with more than five feet of draft you may find it safer to anchor off and conduct dinghy ops. 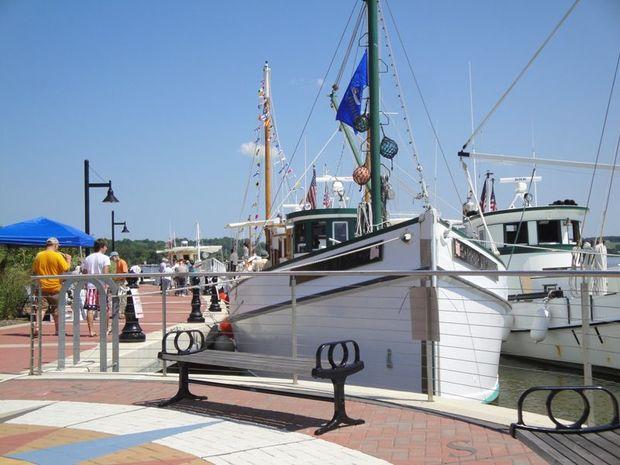 The Wharf has been restored and includes a wonderful park, featuring a children’s playground, wrought iron benches, a concession stand, and a pavilion. Rent a paddleboard from Patuxent Adventure Center, or take a Breton Bay cruise with Compass Point Charters on either a sailing yacht or powerboat. Walk up the hill and eat at one of the many cafés and restaurants. See the old county jail by the courthouse and take a tour of 18th century Tudor Hall, a relic from the past restored to its full regality and home of the St. Mary’s County Historical Society. Shops and galleries line the square making for a welcoming atmosphere of friendship and small town hospitality. 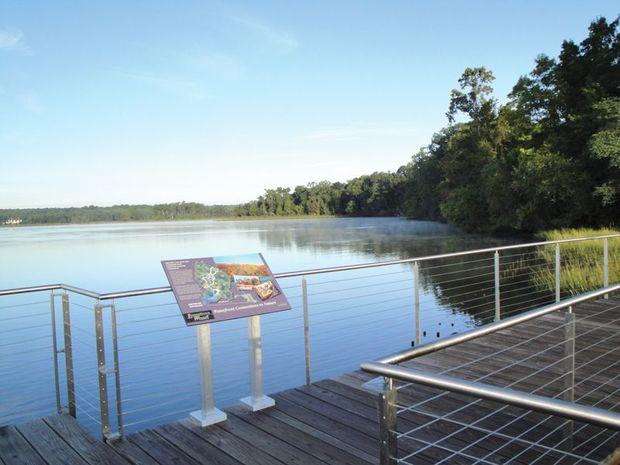 The headwater of Breton Bay draws you in with a panoramic vista of the marsh delta off Macintosh Run. This waterway sprawls gracefully into the open with the south shoreline remaining in its natural, unspoiled, and wooded state. After enjoying the natural beauty of your journey, the Leonardtown Wharf invites you to tie up and spend some time in this tranquil harbor, have a cocktail, and watch an amazing sunset over the very waters that brought so much history to this delightful place. Learn more about St. Mary's County at visitstmarysmd.com.