One of the best attributes of the Chesapeake is its connection to the deep blue; our ports are opened to world-wide shipping while the mix of fresh-water and oceanic finned morsels provide some of the best fishing on the East Coast. Trouble is, our benefaction is also our Achilles’s heel: salt. 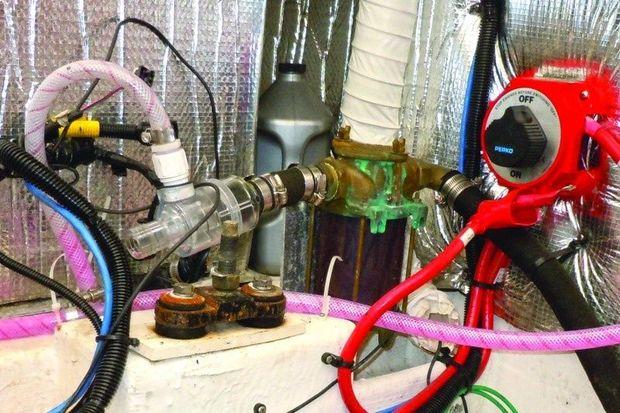 Tide and latitude conspire together to increase the salinity most-everywhere we boat. Most boaters think of salt as our foe because the increased conductivity of water due to salt (specifically, salt-ions) leads to an increase in galvanic corrosion of our metal running gear (props, shafts, thru-hulls, rudders, and plates) … and they would be (mostly) correct. Some (mistakenly) think bottom-paint is required because of salt in our water, but this is a secondary-effect. Cuprous biocides in bottom-paint work great at repelling marine crustacean due to our brackish water, but they also hasten galvanic corrosion due to the dissimilar electron-potential between metals on our boats. Unless everything on your boat’s undersides is made of copper, using copper-filled paint is a guaranteed combination for electrolysis; the copper protects stainless steel well, but it is much more noble than steel or aluminum.

While electrolysis is certainly bad for our metals, it is easily mitigated by good grounding (“bonding”) of metal parts together and by the use of sacrificial zinc (the least noble metal except for magnesium) anodes. We can visually see galvanic effects through routine inspection of our zincs, usually before any serious damage occurs. The real problem for our vessels is use of cast-iron everywhere in our power-plants. Saltwater significantly damages cast-iron, not by electrolysis, but by oxidation; aka rust. Engine manufacturers use cast-iron everywhere, from the engine block itself, to the intake manifold, to the heads, to the exhaust manifolds, solely for economics.

Boats used on freshwater lakes can get away with raw water cooling (RWC), where raw outside water is simply pumped through all parts for cooling, but this is disastrous for boats used in saltwater. Boats in our area require FWC (fresh water cooling), which circulates antifreeze in a closed-loop through most of the engine parts, similar to an automobile. FWC uses a heat-exchanger between the colder raw-side water and hot fresh-side antifreeze in cooling systems, usually made of copper or brass, which does not rust due to contact with salt. The only parts of our engines not protected by the closed-loop antifreeze FWC-systems are exhaust risers and elbows (and exhaust manifolds, to a limited extent).

Our cast-iron parts aren’t damaged too severely by rust while in use, but any saltwater allowed to sit in cavities for extended periods between use will take their toll on longevity. Most modern boat motors come with flush-fittings, which allow city-water to be pumped to engines and exhaust through a garden hose during your cool-down at the dock. Outboard motor fittings are usually accessible, but OEM flush-fittings on inboard motors (like mine) are often harder to access, requiring fittings such as Perko’s FlushPro to be installed, and then plumbed exterior to the boat’s hull. 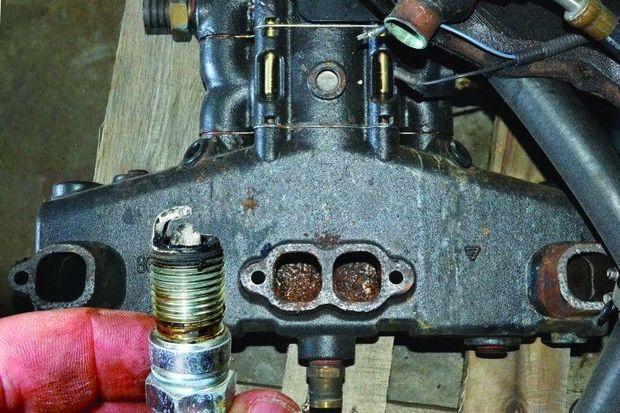 One mustn’t forget the generator’s cooling passages either, as my generator has no OEM flush-fittings, but requires the same protection as the big engines. There are other methods, such as chemical neutralizer kits such as Volvo’s Neutra-Salt or Innovative Products’ Salt-Away, which can be added to any engine, injecting a small amount of liquid at engine shutdown to neutralize whatever salt is left behind inside the raw-water cooled parts. Unfortunately, corrosion isn’t the only culprit at work; though inspection of zincs for pitting damage caused by galvanic processes is straightforward, measuring weight-loss of the zinc is preferred for quantitative tracking purposes.

Since oxidation is also at work in saltwater, inspection for rusting of the exhaust risers, elbows, and manifolds generally requires a borescope (flexible camera) or physical disassembly to observe their internal passages. Rust buildup inside the raw-water jacket of elbows and risers reduces flow and cooling capability, eventually cracking internal passages if rust is allowed to exist for long periods. A crack of internal passages in a riser or elbow is catastrophic and can hydrolock an engine, breaking everything from pistons, to rods, to your engine’s crankshaft.

While I chose to install FlushPro fittings on my boat to facilitate winterization and operation of my engines while in dry-dock, the salt-neutralizing chemicals also work well to reduce rusting of cast-iron parts during lay-up. No matter which method chosen, you need to faithfully make every effort to eliminate salt from your engine’s diet as part of your cool-down procedure every time you return to the docks. Exhaust-parts protected by freshwater-flush or salt-neutralization may see one-to-two decades of trouble-free operation, but unprotected manifolds used in saltwater need visual inspection yearly starting at about five years of use. Spending $250 per motor to save $2500 in exhaust parts (or much more, should a leak in the exhaust hydro your engine) is a no-brainer versus yearly disassembly of your exhaust system. 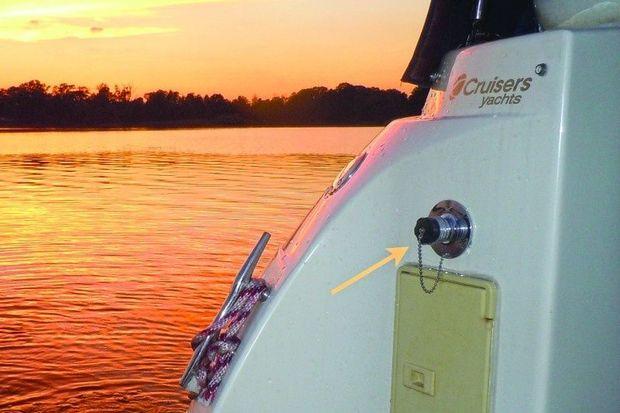 Above all, as part of your yearly winterizing and decommissioning, physically pull and inspect every spark-plug from your engine. A light tan to brown center electrode is perfect, while an oily electrode may indicate poor compression or ignition. But an electrode with flaky white or powdery grey build-up is a solid indication that you may have (salt) water running back into your engine … certainly worthy of pulling your manifolds and risers to inspect.

About the author: Mike Edick has driven, owned, or repaired boats for more than 40-years. He's worked for 25 years as an electrical hardware design engineer and designs and tests space-flight satellite instrumentation as a contract senior staff engineer at N.A.S.A.