Wheeler Baker, a legend in hydroplane racing, will be inducted into the Maryland State Athletic Hall of Fame (MSAHOF) this November. A native of Chester, MD, Baker competed for 30 years. He has won the coveted title of National Champion 10 times from the American Power Boat Association (APBA) and is an eight-time National High Points champion in various classes. He has also set six competition speed records. Now 69, Baker looks back on some of his early racing experiences that got him truly hooked on the sport. 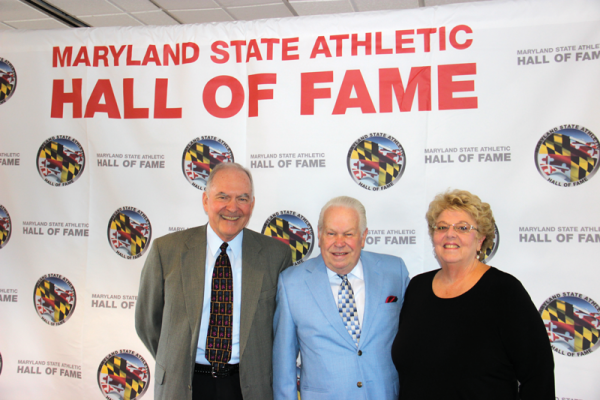 Post World War II, Baker’s father and grandfather teamed up to buy their first race boat sponsored by the family’s company business, R.B. Baker and Sons. Owning the national beer distributorship for the upper shore, the first boat, Bo Bo, was purchased and Alton Pierson, an employee and good friend, drove it. Pierson was inducted into the MSAHOF in 1983 for his racing accomplishments in Bo Bo. Three boats later, the Bo Bo Too, a 280-cubic-inch Chevrolet with a hull built by Henry Lauterbach, hit the racing circuit. Soon after, Baker’s father Albert bought his son his first race boat, a J Utility outboard, designed for beginners. He had his first race in 1955 when he was just eight years old.

“It was on the Wye River. I had no clue what I was doing, but I knew I was hooked,” Baker says. He began dreaming of ways to make his boat perform better. Through testing boats on the Wye River and observing more seasoned racers, Baker developed a drive to win.

By the time Baker was in high school, he remembers Vietnam getting very “hot and heavy,” so after graduation he enlisted in the Air Force. As his four-year tour was about to end, his sergeant asked repeatedly for him to re-up, but Baker just couldn’t do it. “I remember telling my sergeant ‘there are two things I want to do, and I can’t do them here: hunt ducks and race boats.’” Soon after leaving the air force, Baker bought a boat, began working for the family business, and started to learn what real racing was all about. After working in the family business for a few years, Baker went into business for himself which allowed him to buy his first new Staudacher-built hydroplane, Nudder Bo.

His brothers had already been racing for several years so even though he was the oldest (31 at this point), they used to taunt him for getting in the game so late. But he figured if they could do it, he could do it, too. And in 1977, Baker won National High Point honors, after winning more races than anyone else in his class in the nation.

Throughout his career, he would have five boats of his own, and he would also drive for various teams. “My 7-litre Baker’s Dozen was the epitome of what I thought a race boat should be. I worked with Jon Staudacher on the design, and he built some very innovative functions into that boat. She was fast!” Baker recalls. In 1986 he started driving Prime Mover out of Fort Lauderdale, FL. The next year he got inducted into the APBA Hall of Champions. He also set a course record that year that still stands, no doubt helped by the fact that he got his boat up to 140-plus miles per hour on the straightaway.

Soon after Baker began driving for another team out of Florida, Miss Aquamet; he won Nationals and set even more records. In the New Jersey-based Big Bird, Baker set two records, won National High Point honors, and the National Championships. In the Florida-based national modified Run Away, he won the Nationals. He also won his last major race, which took place in 2007, aboard the Run Away in Hampton, VA.

By that time Baker had had two ankle replacements on his right side and unfortunately lost use of his throttle foot. So, he retired from racing and bought a 5-litre class boat that he has been tinkering with ever since. Throughout his racing career, Baker also served as the president of the Kent Narrows Racing Association, which he helped form in 1990 with a group of like-minded racers.

Powerboat racing had been held at Kent Island Yacht Club since the mid-1950s, but after a hiatus in the 80s, this group of racers decided to bring it back to the shore. “A bunch of us got together and said ‘let’s do this.’ And I think our group is one of the best in the country.” After depth restrictions effectively shut down racing at Kent Island, the group continues to look for a new venue in Maryland. “We’re surrounded by water but can’t find a place to race,” Baker says, but he remains hopeful. In the meantime, the group has offered its services to other race organizations and venues around the country in order to help put on better racing events.

Today, Baker continues to serve as the president of the Kent Narrows Racing Association and is focusing on his business, Baker’s Liquors, Inc. with his wife Holly. He also serves as the head of the Chesterwye Foundation, which helps physically and mentally challenged adults, and has been on the board of directors for the Queenstown Bank of Maryland for 37 years.

When he found out that he would be inducted into the MSAHOF, Baker was incredibly humbled and excited, but he admits he was far more excited for what it would mean to the sport and to his family. “I’m extremely humbled by this award. When you give this to me, you’re giving it to my whole family. All those years my wife and some of the best employees a business could ever have covered for me while I raced hard. We have a retail liquor business, and I would be off racing weekends in the summer when the store would be doing the most business. But I had a passion that drove me, and I had to do it. I didn’t want to be old and look back and wish I had done it. I wanted to really do it.”

Baker will officially be inducted into the MSAHOF on November 3, along with other Maryland athletes. To purchase tickets to the induction ceremony, click to mdsahof.com.