What It's Like to Almost Win the White Marlin Open

It has been my good fortune to have covered the White Marlin Open since the very first one 43 years ago. While the brainchild of Jim Motsko was pretty small at first, it has blossomed into the largest and richest tournament in the world. For those unfamiliar with this contest, the top prize, usually more than $1,000,000, goes to the angler who catches the largest white marlin during the one week run of the tournament. Prize money is also awarded to the boats that capture the second and third largest white. Blue marlin, tuna, and dolphin are also awarded prize money, but it is the white marlin that carries the top-dollar prize. 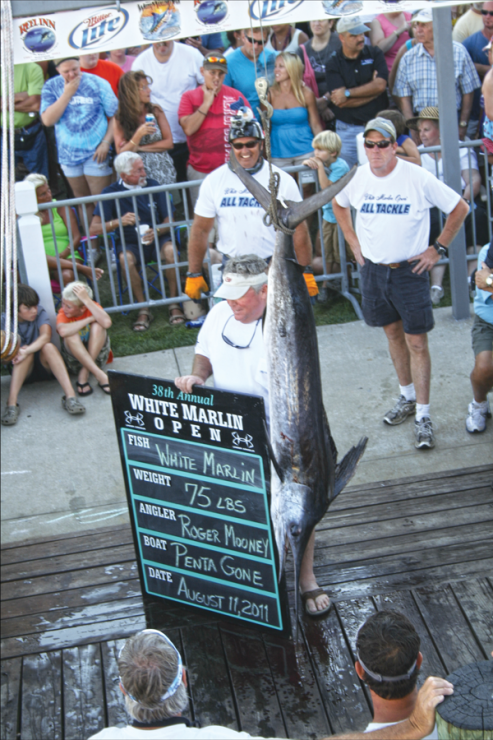 This year, we almost won a prize. I fished on the Volvo Penta-owned 70-foot Spencer Penta Gone. This was and still is the largest and most fantastic boat I have ever been on and had every bell and whistle known to man. Captain Ed Szilagi ran this floating showroom, and since he was involved in the design and build, he had a pretty good idea how everything worked.

At first light Ed headed out of Ocean City towards the Washington Canyon about 60 miles to the southeast. There was plenty of excitement onboard as everyone talked about where we were going, the latest report of white marlin catches, and strategy for winning the tournament. Having heard it all before and getting up at 3 a.m., I slept. We were on site a bit early, since the call for lines in wasn’t until 8:30 a.m., so Ed started looking around for any sign of fish or bait. When the call for lines in came, we were ready and had everything deployed in a few minutes.

Our first fish of the day was a small blue marlin that was released. Both blue and white marlin carry minimum sizes in order to be landed in the tournament. Both also have a minimum weight, and there are some fish that meet the minimum length but fall short of the minimum weight. That particular blue would not have met either criteria. The next fish we hooked was a white marlin, and when it was brought alongside the boat, the decision was made to bring it aboard for a measurement. Low and behold, that fish measured above the minimum length and looked as if it would also meet the minimum weight requirement.

The marlin was covered with towels and kept wet with the saltwater washdown hose so it wouldn’t lose any weight. As the day went on, the wind picked up, and the seas built to five or six feet. In spite of this, the ride back was smooth as silk, and we had two big outboard go-fast boats cowering in our wake. After the normal half-hour wait time at the Route 50 drawbridge, we headed to the scales at Harbour Island Marina. In all my trips during the White Marlin Open, this was the first time I had ever been on a boat that caught a marlin large enough to weigh in. I must say the excitement level on the boat was pretty high.

I have covered BASS Master Classics where the anglers ride their boats in to an arena with thousands of cheering fans, but for me, the electricity at the scales here far excited that experience. Of course, I wasn’t in the boat at the BASS Masters Classic. The weigh-in crew for the tournament got the marlin out of the boat and on the scales like the well-trained pros they are. We all held our breath until we saw the weight, 75 pounds, and then we knew we were in third place.

You may think, of course, ‘they were excited, they were going to win a lot of money.’ Well, no we weren’t. All hands on the boat sign an agreement that any money won goes back to Volvo. It was just the excitement of the moment with the cheer that went up from the crowd and the angler, Roger Mooney, posing for the official photo. Unfortunately, the euphoria only lasted until Friday afternoon. That’s when another boat came in with the second place white marlin and knocked us out of third. No awards banquet, no bragging rights, but still one of the most exciting days of my life.