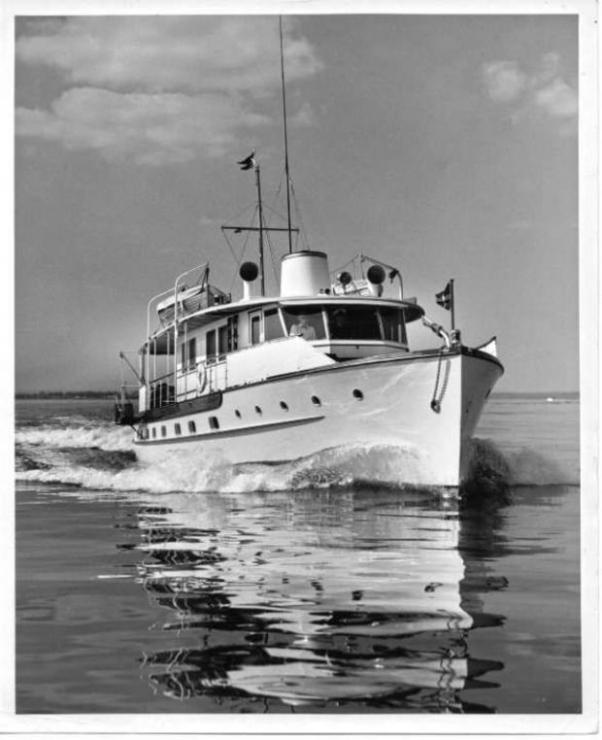 Some of the most exquisite custom yachts ever produced were built in Annapolis during the mid 20th century. Led by premier yacht designer John Trumpy, three generations of Trumpys and a team of skilled craftsmen designed and built distinctive wooden boats at the Trumpy yard located on Spa Creek in Eastport from 1947 to 1974. A Trumpy boat is easily recognizable for its classic design, beautiful lines, striking finishes, and impeccable craftsmanship. Founder John Trumpy, a Norwegian-born naval architect and third-generation boat builder, began producing custom boats in partnership with John Mathis and Company in 1910 in New Jersey. By 1947 Trumpy’s side of the business, custom yacht design and construction, was renamed John Trumpy and Sons and relocated to Annapolis, where the business and family became an important part of the local marine industry and nautical culture. Heralded as the “Rolls Royce of motor yachts”, Trumpy yachts were commissioned by such well-known families as DuPont, Guggenheim, Chrysler, Firestone, and Dodge. The Trumpy Sequoia famously served eight Presidents from Franklin D. Roosevelt to John F. Kennedy. Though more than 450 Trumpys were built, today fewer than 100 survive. Yet they remain highly valued and appreciated, especially by their loyal following. In 1999 more than 100 Trumpy owners and fans gathered in Annapolis to celebrate the boats and connect with one another. Trumpy yachts and the craftsmanship of wooden boatbuilding are preserved in a new exhibit at Maryland Hall for the Creative Arts in Annapolis. “A Single Goal: The Art of Trumpy Yacht Building” will be on display May 12 to July 15. Patrons may explore the art and craftsmanship of wooden boatbuilding with a focus on the Trumpy yacht yard. View historic photographs, models, paintings, and original drawings. In addition, a lecture series and educational program will be presented, and several Trumpy yachts will be docked in Annapolis. In preparing the exhibit, professional curator Sigrid Trumpy, an artist and the granddaughter of John Trumpy, studied her family’s rich archives and consulted historians, former yard employees, local experts, and many other resources. In the fall, the display will travel to the Chesapeake Bay Maritime Museum and other destinations. by Beth Crabtree
Chesapeake Bay News