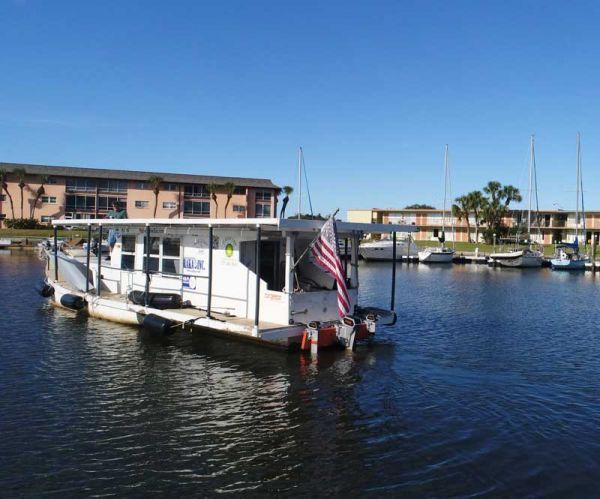 The Great Loop voyage took RA from Florida up the East Coast, through the Great Lakes, down the Mississippi and across the Gulf of Mexico, completing the trip at Sand Bar Island, Florida. It was completed in two segments with a break in Waterford, New York. Greer said this was the first time a solar-powered all-electric boat has completed the Great Loop. “With solar panels, batteries, and Torqeedo electric motors we were able to complete our travel days without any use of fossil fuels or plugging into marina electric hook-ups when docked,” said Greer. “We don’t have a backup generator or power cords in case of emergency, as that's the adventure in it.” The custom vessel, designed and built by Greer, is a 48-foot trimaran named for the sun god of ancient Egypt. It is propelled by a Torqeedo Cruise 10.0 kW motor and a pair of smaller Cruise 4.0 kW outboards. The electric motors draw power from two banks of batteries – one with four 12V AGM batteries in a 48V configuration, and the other with eight of the same batteries also in a 48V configuration. The batteries are recharged from the array of 20 245-W solar panels on the roof of the cabin. 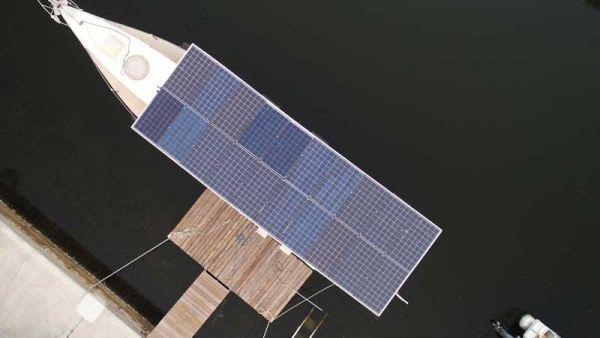 Greer estimates that the cost of fuel for a similar size boat would have been at least $10,000 for the Great Loop. “Not only did we save money on fuel, we achieved zero emissions, demonstrating that boating doesn’t have to pollute the air or water with emissions from a combustion engine.” “The Torqeedo motors are real workhorses,” said Greer. “They are amazingly efficient. We recorded a top speed of 10.7 mph at 7300 W, but we normally ran at five mph to optimize battery capacity, typically putting in a 30-mile run per day.” The overall integrated solar-battery-motor system worked very well, according to Greer. “We could easily run all day on solar power when the weather was good. We could also run on the batteries for extended periods of time without sunlight. Our longest single run was 142 miles in 42 hours non-stop day and night crossing the Gulf of Mexico.” “Captain Greer’s pioneering solar-powered voyage provides a compelling validation of the efficiency and reliability of electric boats,” said Steve Trkla, president and general manager of Torqeedo, Inc. “No doubt about it, electric is the wave of the future,” said Greer.
Chesapeake Business News