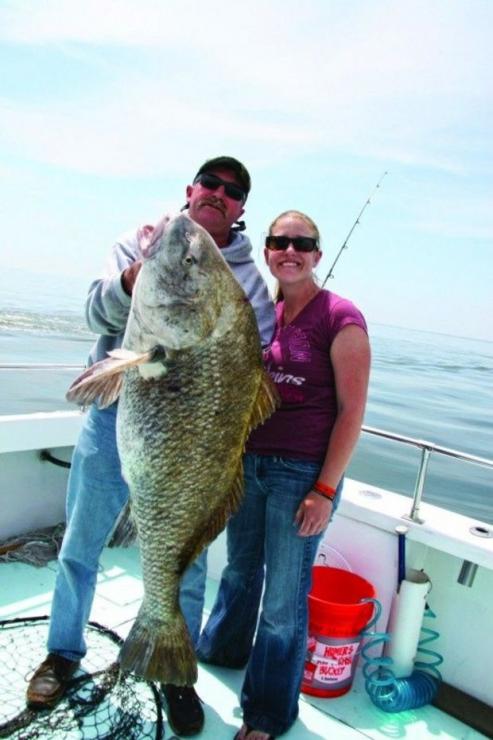 I’d heard about Captain Randy Dean years before I’d actually met him. I’d heard some of his customers compliment him on his ability to put them on fish, his collegiate demeanor and chops as a professional skipper. In the years since, I’ve not only had the pleasure to wet a line with him, but I also consider him a friend. Like many in his industry, Captain Dean was bitten by the fishing bug very early in life. As a young boy, during the school year he lived in Maryland but spent summers with his grandmother in West Virginia, where he was born. Every day he fished on the Meadow River. To support his angling passion he collected Coke bottles and sold them to the local supermarket, then used the monies to buy lures and baits. Today, Captain Randy still loves to fish as much as he can, but the big difference is today he does it for a living on bay-built boats. Through his business, Bay Hunter Charters, Captain Randy operates three charter boats that sail from the Rod N’ Reel dock at Chesapeake Beach, MD. His sons, Ryan and Matt, are both first mates. He’s also the tournament director for the Rod N’ Reel Pro-Am Captain’s Association Tournament, which is now in its 36th year, making it one of the Bay’s longest running striper tournaments. Randy lives in Severna Park, MD, with his new bride, Tara. PropTalk: What are your three favorite fish to catch and why? Captain Dean: Striped bass because they are my “bread and butter.” I do prefer live lining them over trolling. Sea Trout (Weakfish): I like to find them piled up in deep water on a channel edge and jig them up two at a time. Black drum would be the most challenging for me. They are hard to find, bite like a spot, and look prehistoric. What was your most memorable catch? My most memorable catch was 17 years ago. I was fishing with planers and spoons for blues and Spanish mackerel on the Stone Rock. When all five rods popped, the planers went down hard. At first I thought we had hung bottom until the third planer went under the boat. I took the boat out of gear, and line was still peeling off the reels. The party I had onboard had never been fishing before and boy, were they in for a surprise. The first one (fish) came to the boat was a 42-inch red drum. Unfortunately, the leader must have rubbed something under the boat, and we lost it before we could net her. The other four drum were boated and were cookie-cutter 42-inch fish. What a battle they were! What famous person would you like to fish with? I watch a lot of hunting shows in the off season. Ted Nugent surprised me when I saw his show. Who would have thought a rocker like him would live on a ranch and love to hunt and fish. He has great quotes and humor as well as good cooking skills. What better person to fish with than someone who has the same interests? What’s the most underappreciated game fish? I’d say Atlantic croaker, because pound-for-pound they are the best fighting fish in the water. If they were allowed to grow to 30 inches, they would be the most sought-after fish in the Bay. When we were in our heyday of night fishing, it was nothing to catch our limit of them (25 per person) with a self-imposed 16-inch minimum. We’d start fishing June 1 and didn’t stop until August 15. And, were booked every night. Looking back I wish the limit would have been 10 per person, 16 inches and bigger. We haven’t seen them like that for many years now and between charter fishing, commercial netting, and recreational fishing—not to mention Mother Nature’s changing climate—I hope they make a comeback soon! What is one of your favorite fishing quotes? Old timers say “the junkyard dog won’t bite on an east wind.” by Capt. Chris D. Dollar
Chesapeake Bay Fishing