Was the Smith Island Crab Skiff Always a Race Boat?

Smith Island crab skiffs participate in boat races around the Chesapeake Bay throughout the racing season. Have they always been race boats? No. Historically they’ve been used since about 1920 by hundreds of watermen to catch and sell soft-shell crabs. During Prohibition they were also used extensively by rum runners.

The crab skiff’s unique design allowed access into the shallow, back corners of the Chesapeake Bay and its tributaries. Here’s a closer look at the boat’s history… Crabbing Industry Crab skiffs were built in numbers on the Bay from about 1920 until about 1935 (prior to 1920, they were built as rowboats). One boat builder reportedly crafted around 150 of this small fishing/crabbing powerboat with various design modifications. Other builders (often Bay watermen) would build crabbing skiff boats whenever they couldn’t be out working on the water. They only needed to round up the basics: some wood boards, a few nails, any old, small gas engine, and some really common powerboat supplies such as a rudder and a prop shaft. A regular steering system, cleats, lights, and other boat hardware were skipped entirely. 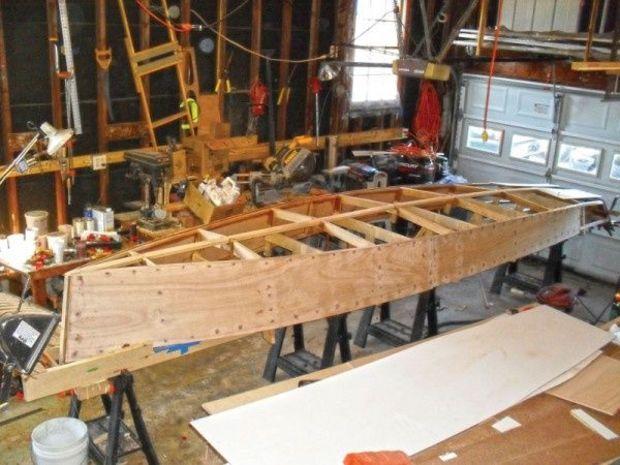 Rum Runners During Prohibition, most of the liquor came into the United States from other countries via large ocean-going sailboats and freighters. The cargo was then transferred offshore onto 40- to 80-foot delivery vessels and brought into the Bay. Since those delivery vessels needed good water depth, they could only offload at a pier (which was often watched by the police). Enter the crab skiffs that allowed the liquor to be offloaded from the delivery vessels in a quiet cove and then transferred to trucks for final distribution. It was simple to lay cases of booze across the bottom of a crab skiff and then throw a burlap sack over them. Throw some fresh crabs over that, and top it all off with another piece of burlap, covering the crabs. It was the Depression era, so money was hard to come by in the small towns along the Bay. Bootlegging liquor could put food on a family’s table. 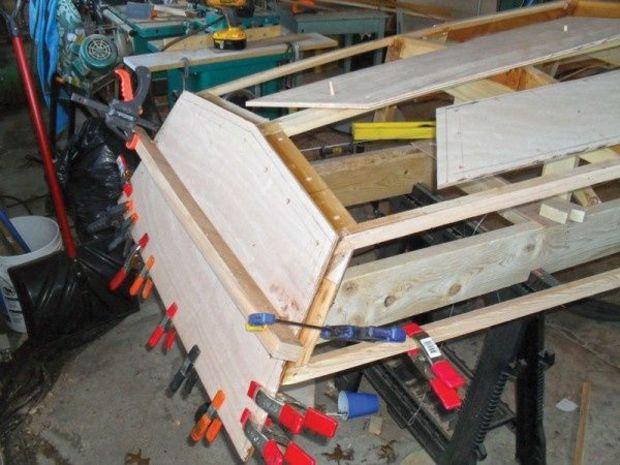 Today’s Skiffs as Race Boats These racing boat woodies are roughly 19 feet long by about three and a half feet wide. The skiffs are framed using readily available lumber such as spruce with the joints gusseted. The decking, hull sides, and bottom are made from thin-skinned (three-ply) Okoume plywood made from a fast-growing, plantation-harvested tropical hardwood called aucoumea klainean. The plywood panels are run with the longer dimension fore and aft. All of that wood is covered on the outside of the skiff with a light-weight (usually six-ounce) layer of fiberglass cloth.

For steering, a long handle is fashioned toward the front of the cockpit that the driver will move back and forth to control the aft-mounted rudder via a clothesline. Power for a Smith Island crab skiff is referred to as a “lawnmower” engine that develops 20-hp. These boats use a traditional inboard shaft drive to the propeller, but there’s no gear box. Just point the boat away from the pier and start the engine — in gear — and you’re underway and ready to race! For more information, click here.