Six Facts You Might Not Have Known About Ospreys

Have you tuned in recently to the Explore.org and Chesapeake Conservancy's osprey wildlife webcam? The camera is positioned on a nest in a secret location in the Chesapeake Bay, home to ospreys Tom and Audrey. The same pair of ospreys from last year returned to the nest on the evening of March 18. As you start to tune in, here are some cool osprey facts you might not have known, all courtesy of the Chesapeake Conservancy.

1. The name "osprey first appeared in 1460 as the Medieval Latin phrase for "bird of prey."

2. We might consider them a Chesapeake bird, but ospreys are in fact found on every continent except for Antarctica. They live close to bodies of water with an abundant source of fish, such as salt marshes, rivers, ponds, or estuaries.

3. Osprey nest in both man-made and natural elevated structures near water, including dead trees, light towers, and man-made platforms. Most nests are built of sticks and lined with additional natural materials. After years of adding to a nest, osprey can end up with nests as big as 13 feet deep and six feet in diameter.

4. Their primary predator is the raccon. While not a threat to adult ospreys, raccoons will steal and eat osprey eggs found in nests. Most nests are built at higher elevations to protect against predators.

5. When diving into the water to catch fish, osprey can close a third semi-transparent eyelid that acts as goggles to help them see underwater. Osprey also have opposable toes and barbed footpads, which allow them to hold onto their catch when returning to the nest.

6. After an almost 90 percent decline in population from 1950-1970, osprey populations have rebounded due in large part to conservation efforts and the banning of DDT. Partners in Flight estimates a global breeding population of 500,000. 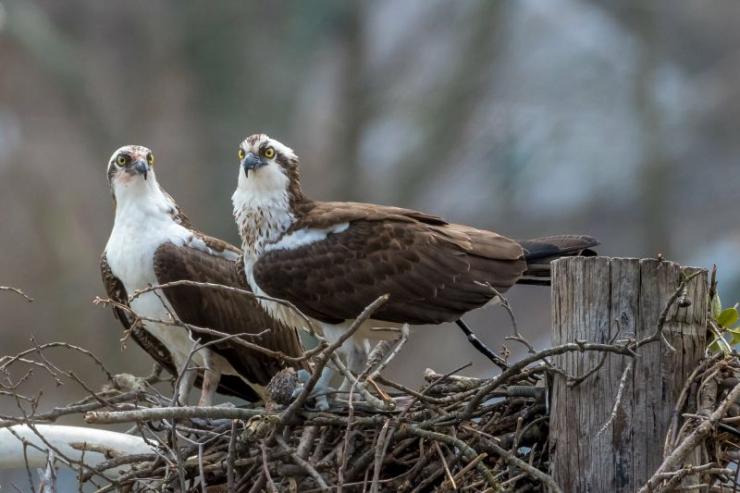 The Chesapeake Conservancy also has a peregrine falcon cam, set up on a skyscraper in downtown Baltimore, and a great blue heron cam, in a heron rookery high in the treetops.