Summer is nearly over. The days are getting shorter, the nights a little cooler, and the first hints of autumn are in the air. It has been a busy summer for Chesapeake country boatshops. The fall appears to continue the trend. Plans are already being made for fall lay-ups and winter projects, although it seems like summer has just begun.

Geniene Nieves-Vigneri at Mathews Brothers in Denton, MD, sums it up. “We have been very fortunate over the summer and have continued to stay busy with repairs and maintenance requests from various customers. One of the conveniences we offer is the ability to travel to an owner’s home to perform specific requests or fix many issues on their boat that may crop up over the season. It has been chaotic at times, but it’s also been delightful to hear the positive feedback and appreciation from the customers for the jobs being performed thoroughly and/or dispatching someone in a timely matter for emergency situations. With the turn of the season and fall approaching, we are preparing for the return of winterizing boats and indoor storage customers. 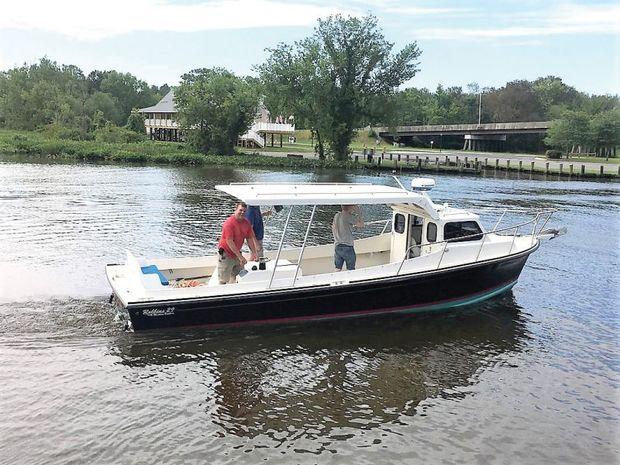 A few customers drop off their boats off, but many take their boat for a “last summer ride” up the beautiful Choptank River to be picked up at Mathews Landing. The majority, however, will be hauled by the Mathews Bros team; we’ll meet owners at any ramp, as well as providing a concierge pick up service from their dock. Our winterization checklist is very thorough, so we may alert the owner to any issues that may need attention. Many owners who store with us over the winter also elect to have repairs and refits, such as varnish, gelcoat/paint dings, and paint jobs performed while their boat is in storage, allowing them to be stress free and ready for their spring launch date.”

Susan Campbell of Campbell’s Boatyards in Oxford, MD, also checks in with a busy summer. “Campbell’s Boatyards had a busy summer season. Transient business was up, and customers have been upgrading equipment on their boats. As September rolls around, we are expecting full dry storage lots, including our indoor storage space. We have several significant projects scheduled this winter, including paint jobs and repowers. Over the summer we have added Gorham Miscall to our team as a systems/electrical technician. Gorham brings many years of experience to the Campbell’s team. There is no need to look any further than Campbell’s for all your electronic and electrical work including complete system upgrades. We were also pleased to bring Erin Beatty on as a service advisor at our Campbell’s Bachelor Pt. location. Erin has many years of project management experience, working for over 15 years at Bayliss Boatworks in North Carolina. Hope to see you here!” 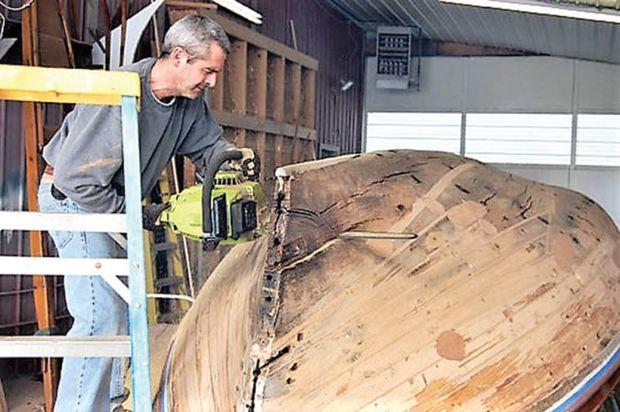 Alex Schlegel of Hartge’s Yacht Yard in Galesville, MD, agrees with the general consensus. “Most of our summer and fall work depends on people using their boats and finding out what needs maintenance or repair, so we are always looking for good weather. If the weather is not conducive to getting out on the Bay, we notice our work load drops off. This year work has been good so the weather must be also.” Alex can always be counted on to send us not only entertaining reports, but also instructive ones. The following story deals with a subject that many boaters talk about, but few understand: the dangers of electrolysis: “An unusual and curious thing happened on a sailboat rudder, but it could have happened on any boat with a metal rudder post. The owner backed out of his slip and then couldn’t steer at all. We towed him to the Travel lift and upon haul out, found the two-inch rudder shaft, between where it leaves the hull and the top of the fiberglass blade, completely missing. The remaining metal was bright, shiny, and chewed up. That is a sure sign of direct current grounding through the metal into the water.” 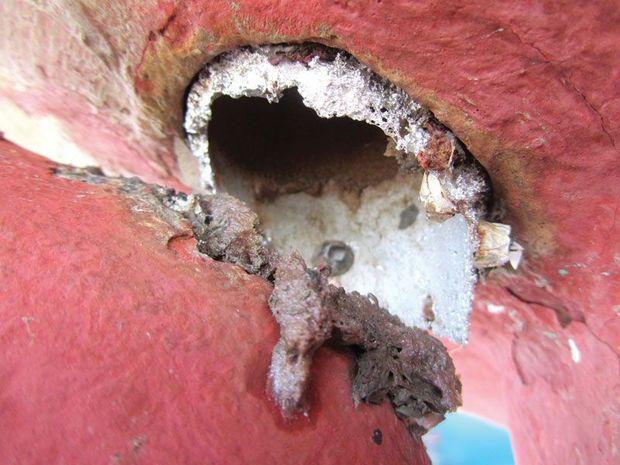 “To repair the rudder we cut the fiberglass blade back to expose about six inches of the rudder shaft, spliced and welded on a new shaft, and rebuilt the fiberglass that was cut off. This saved about one half the price of new rudder. After installation, we checked for stray current. It turns out a nonfunctional autopilot was putting 12 volts through the ram, tiller arm, and rudder shaft and into the water. The current went through the water, to ground somewhere back on the boat, and took some metal with it. This case was a strong example of stray current corrosion. If the boat was wired properly, a breaker would have popped and no damage would have occurred.”

Alex also reports on serious damage done by another kind of neglected maintenance. “We took the engine, a Volvo Penta D6-4351A, 435-hp 3500 out of a True North 34. The owner doesn’t like hot weather, so summer is the time for him to get major work done. The previous owner let a leaking water pump go on leaking. That resulted in rust ruining the harmonic balancer, oil pan, one engine mount, and water pump. To do the repairs, the engine had to come out. Our crane has a large end on the boom, which made for a tight fit. Measuring the engine, crane, and boat told us there may or may not be room. It was tight, but by cocking the back of the engine up and lowering the stern with the Travel-lift, we had a half inch clearance on both the top and bottom.” 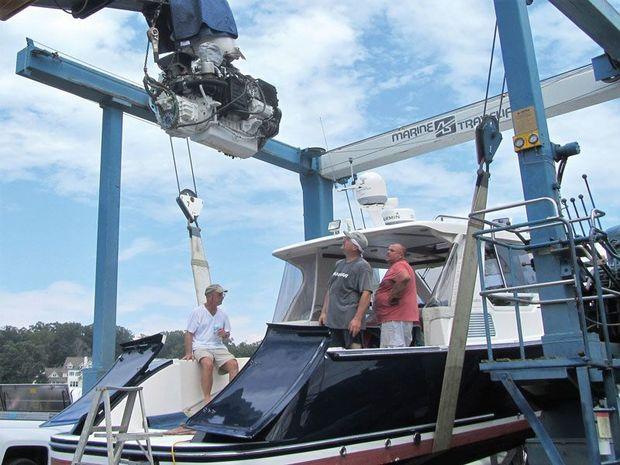 For the past few months we have been following the restoration of the bugeye Edna E.Lockwood at the Chesapeake Bay Maritime Museum (CBMM) in St. Michaels, MD. Here is this month’s update. “CBMM boatyard manager Michael Gorman reports that work continues on the historic restoration of 1889 bugeye Edna E. Lockwood, with each of the nine-logs making up her new hull pinned together and shipwrights fitting chunks in her bow and stern over the summer. It was a busy spring in the boatyard, with the hull flipped via crane in April and the two wing logs pinned to the rest of the assembled hull in May. In July, the hull was moved around the boatyard to sit directly next to Edna Lockwood in preparation for the next steps in her restoration. 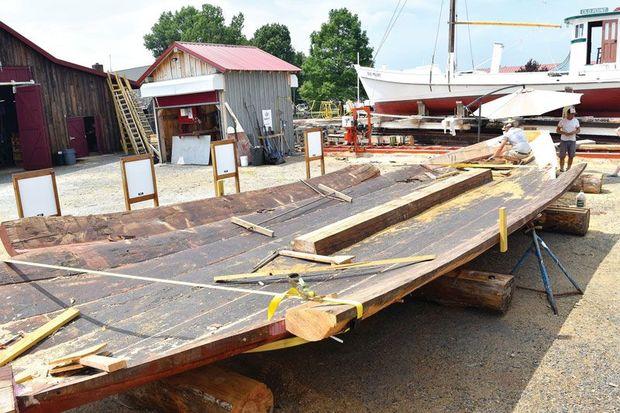 This month, Edna’s topside will be moved to the new hull so shipwrights can begin to marry the two, an important step in the restoration project. New stems, hatches, additional structure will be installed this fall, and sails will be sent out to have new ones made. The team is restoring CBMM’s queen of the fleet and National Historic Landmark Edna E. Lockwood by replacing her nine-log hull, in adherence to the Secretary of the Interior’s Standards for Historic Vessel Preservation. Shipwright apprentices working on the project are generously supported by the Seip Family Foundation and the RPM Foundation. 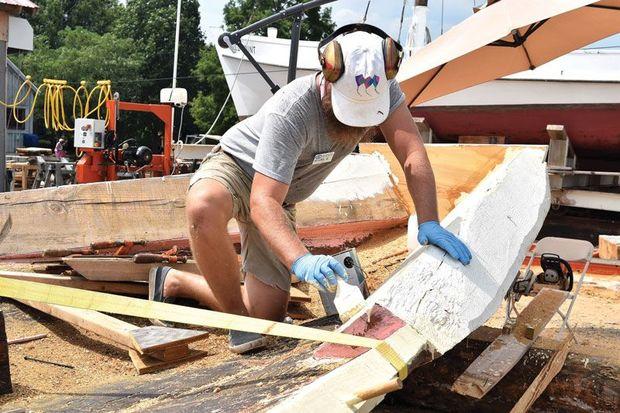 All work takes place in full public view through 2018, when Edna will be placed on the marine railway and launched at CBMM’s OysterFest in October. To keep up with the project, visit ednalockwood.org."