Being the “new guy” in an atmosphere filled with vintage boats and vintage racers can certainly present a basket of challenges. In the fall of 2015, Steven Christman and his father Charlie, a previous Southern Maryland Boat Club (SMBC) racer, found a 1979 Hydrostream Viper in the woods of Lusby, MD, and decided to embark on the journey of powerboat racing. Months of hard labor, sleepless nights, and endless expenses put the Christmans to the test, but their relentlessness to finish the restoration of a boat and engine has proven to be well worth the sacrifices. Steven Christman will explain the rest.

Restoring the boat was what I thought would be the biggest challenge of becoming a racer. When we picked the boat up, my dad just stared at it—he saw so much potential. What did I see? I saw a pile of rotten junk that would likely end up in a landfill. Two years later, I can certainly say that I am amazed at how well the boat turned out, and I am very thankful for the encouragement that my dad provided throughout the restoration. I couldn’t imagine doing anything better than spending time with him to create what has turned out to be a very fast work of art. The motor is a completely different story... We learned to become our own mechanics, and we have actually turned out to be pretty good at it. My dad’s knowledge and persistence has undoubtedly enabled us to be as competitive as we now are. I’m thrilled with the product that we have created. It was a long road to success, but once we found it, there was no turning back.

“Learning to Fly” came into play during the final stages of the boat restoration. Dad and I were putting in long days and even some long nights in an attempt to make the SMBC Race in Leonardtown, MD, in July of 2016. We were sitting in the garage listening to Tom Petty Radio, when he stopped and looked at me, and said that the song on the radio would be our theme song: Tom Petty’s “Learning to Fly.” Since then, the theme has stuck with us, even more so now that Petty has passed on. 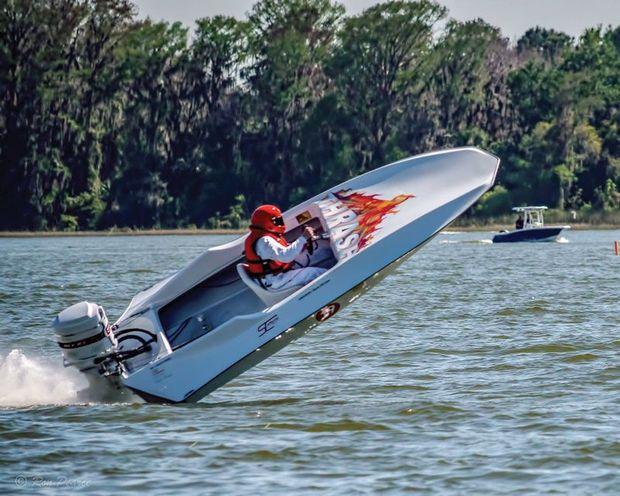 Funny enough, with the odd shape and powerful lifting strakes that are incorporated into the hull design of the Viper, “Learning to Fly” has adapted a more literal meaning for our operation. Unlike similar race boats, the Viper literally flies at top speed. The aerodynamics (coupled with 150 strong horses on the transom) push the boat up into the air at speeds upwards of 60-mph. It makes for a wild ride and mild heart attacks for spectators and family members, but she sure is fast! With this challenge, we are literally learning to fly this boat. Sometimes the “flight” can get a little carried away, so the keyword remains to be learning... But my first year has been phenomenal. The season opener race in Tavares, FL, was an absolute blast, despite the near-blowover that I had during the second heat. Our boat was dominant among the J Class boats throughout the first race and every lap of the second race, until I caught a wave and some wind that took me for a flight. I have a little more respect for the trim button after that experience. The next race we participated in was in Leonardtown. That weekend was definitely the highlight of my rookie season. Weather on the first day prohibited us from running two heats, and the first heat was run in the rain, but our Hydrostream led the entire race. The second day was great as well, finishing third in the first heat and second in the second heat. As we drove home from the races, I reflected on the fact that my Dad and I had done all of that by ourselves. What a feeling knowing that a boat and motor built with your own blood, sweat, and tears is a top-running boat in the APBA J Class!

Looking to the Future

Since then we have been working with our newly formed race teammate to put together packages that are stronger and faster than ever, and we’re even toying with the idea of building another boat. The creation of the THRASH Racing team, consisting of two boats and bringing Michael Harris on board has been phenomenal, allowing us to collaborate and strategize both on and off of the race course. 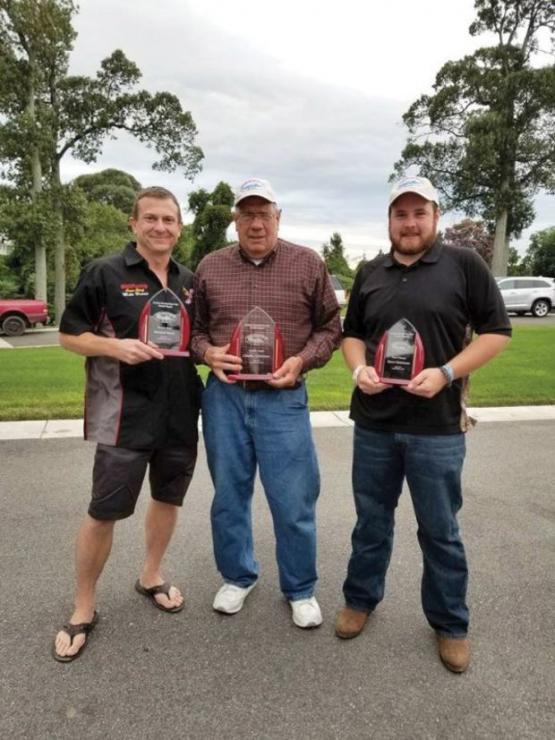 In closing out the summer regatta in Leonardtown, the THRASH Race Team received numerous awards from the SMBC. I received the “Hard Charger” award which is awarded to the “hard charging” driver on the race course. Our boat also received the “Peoples Choice” award from the crowd fan vote. Harris was presented with an award for the outstanding restoration of his Checkmate, Red THRASH, and Dad was given a “Golden Eagle” award for all of his prestigious work to ensure the event in Leonardtown was properly sanctioned. All in all, 2016 was a fantastic year and I couldn’t ask for a better rookie season. I cannot wait for next season, so look out—White THRASH is coming for ya! by Steven Christman
Powerboat Racing