Have you ever tried to spot a channel marker or osprey with your binoculars and then lost your target and had to try again? Boaters understand binocular frustration. One longtime Annapolis boater did something about it. 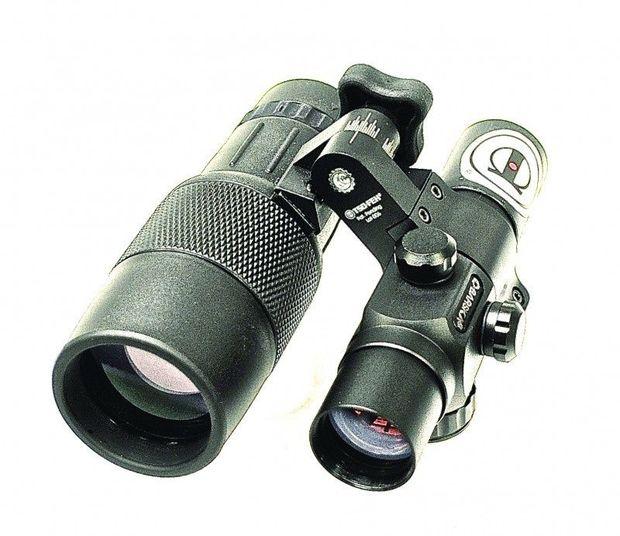 In 2003, Yoachim Russ and his wife watched a couple of university scientists get discouraged while recording the manatee migration in a South Florida nature preserve. One of them used binoculars and a camera to spot the manatees; the other recorded them. The spotter was so irked with the manatees going under before she had a chance to identify them, she was jumping up and down and swearing.

“There has to be a way to make this easier,” Russ thought. He’d built telescopes as a hobby as a kid and was fascinated with astronomy, so it wasn’t the first time he’d considered optics.

He asked himself, “How about if I use one eye to get a point of reference and one to look through a high-powered scope?” He bought some old binoculars and cut one side out. He bought a scope for a rifle with a red dot in it for $10 and attached it.

“The next day, we went to a wildlife preserve and—boom!—it worked.” Hence, the Rapid All Targets Acquisition technology or RATA was born.

But wait. How does this work? “Imagine if I was to put a red dot on your dominant eye. Then you get a high-powered scope on the other eye. One finds the point of reference, and the other seeks the magnified field. The brain figures it out.”

Many who tried it at the U.S. Powerboat Show (this editor included) understood its value right away.

“I can use it now with a bird flying in the sky, and my brain doesn’t even see the red dot anymore. I just enjoy the view,” says Russ. Since 2009, Russ has been seriously focused on his invention and patent. The first part of it came through in May 2016. The scopes are now available for production in Richmond, VA.

Besides helping boaters locate ships and channel markers, RATA scopes are also good for wildlife spotting, stargazing, photography, improving search and rescue missions, and more. Connect with the inventor in Annapolis and give it a try.