Can you really enjoy powerboating without gasoline or diesel fuel? These alternative fuel systems make it possible. 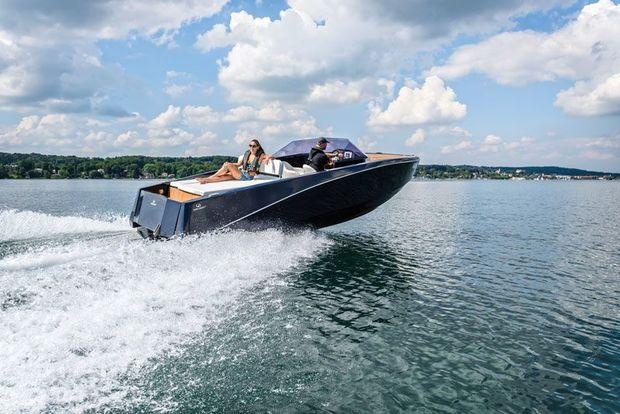 As fun as it is to blast across the water’s surface at planing speeds, burning all that fuel imposes a very real cost on the environment—and on our wallets. And as more and more electric cars hit the roadways, one would think a similar alternative should be available to powerboaters, right? Surprisingly, there isn’t one alternative. There are actually several.

Using electric power is perhaps the most obvious way to leave the fuel dock in your wake, and in the past few years there’s been a lot of progress in this venue. A few short years ago only low-horsepower electrics were on the market, and there’s still a slew of small electric outboards made in the under-five-horse category. But in 2013 electric outboard industry leader Torqeedo introduced a whopping-big 80-hp model called the Deep Blue. At about the same time Campion powered an 18-foot bowrider with a 180-hp electric outboard made by a company called ReGen Nautic—and ReGen says they now have a 300-hp version on the way. Even Cigarette got into the act, building a one-off, electric go-fast called the AMG Electric Drive Top Gun. The 38-foot-long boat holds 12 motors which power a pair of stern drives to produce 2200 hp, providing a 70-mile-per-hour cruise for half an hour, plus “a few blasts” to the boat’s top-end speed of 110 mph. There is, however, one big problem with harnessing electricity for use on a boat: it takes an awful lot of juice. That Cigarette is a perfect example—half an hour at cruising speed is hardly sufficient for most pleasure boaters, and in the case of the AMG Electric Drive Top Gun, even that requires two tons of batteries be crammed aboard. Yes, two tons. Nor is the price tag minor-league, hitting $5 million. Ouch. And while a go-fast boat may provide a rather extreme example, the same issues do have a significant impact on the appeal of the Torqeedo and ReGen. We ran the Deep Blue 80 on a 17-foot flats boat, and it had a top-end of 17 mph, which it could only maintain for about an hour. The cost for the motor itself stays under the $20,000 mark, but when you add in the price of the four recommended batteries at $15,000 each, the cost for the complete package quickly starts looking astronomical. If you’re willing to meander along at displacement speeds, electricity holds a lot more promise. A three-horse Torqeedo can hum along for hours at a time on its integrated lithium-ion battery, and these batteries are small enough to carry several spares. Many sailors find them sufficient for use on relatively small sailboats (Torqeedo says up to one and a half tons), and they certainly perform well as dinghy motors. But if you want more than a handful of horses, it’s probably best to look elsewhere. 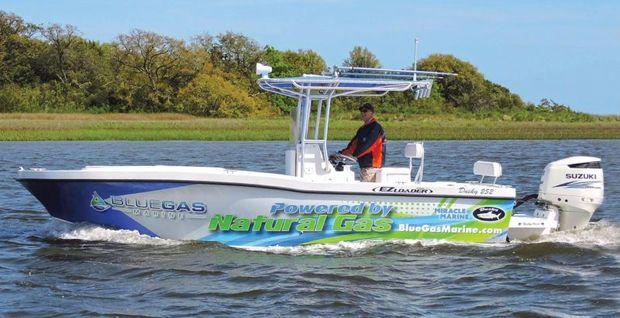 That elsewhere is likely to be gas. But we don’t mean gasoline. In fact, propane and natural gas turn out to be excellent alternative fuel choices. By now most boaters have had some level of exposure to Lehr outboards, which build 2.5 to 25-hp propane-fired outboards. Lehr has a track record going back to 2008; they burn far cleaner than gasoline, and the use of propane eliminates the ethanol issues many small outboards suffer from. They’re only slightly more expensive than a gasoline-powered outboard (a 15-horse model goes for around $3000 to $3500). Range issues are eliminated, since these engines can be run for short distances on those same small propane bottles used for camping stoves, or they can be hitched to the full-sized propane tank that’s sitting in your grill right now. On the flip side, there have been some reported complaints about the quality of some of the parts used in these outboards, and they don’t run as smoothly nor as quietly as a modern four-stroke. On top of those issues, 25 horses is not exactly what we’d call a “large” outboard. Jump from propane to natural gas, however, and the plot thickens quite a bit. There’s no manufacturer currently building a natural gas-only outboard engine—but Blue Gas Marine builds fuel systems that can convert any of the major brand gasoline outboards to run on natural gas. According to Blue Gas, that results in a 70-percent drop in fuel cost, a 40-percent drop in consumption, and a reduction in air and water pollution of 70 percent. One of the most surprising things about a Blue Gas conversion is that the engine can still run on gasoline. Just press a button, and the engine’s ready to burn those liquid dinosaurs at a moment’s notice. And since it’s a conversion, power isn’t limited beyond that of pre-existing outboards. In fact, we ran a Dusky 252 center console with a 300-hp Suzuki outboard converted for use with natural gas. There weren’t any apparent penalties (the engine seemed just as smooth and quiet as usual). Since the Dusky was purpose-built for use with natural gas, other than the decals on the boat and motor, you couldn’t even tell it wasn’t running on the stuff. Therein lies the one rub: the Dusky was purpose-built. Unless you buy new and work with the manufacturer and Blue Gas ahead of time, your boat requires a bit of modification to burn natural gas—you can’t just pump it into a fuel tank that was designed for gasoline. Another potential downside is the fact that you’re not likely to find natural gas at your local marina fuel dock. Blue Gas mitigates this issue somewhat for trailer-boaters by offering a home CNG filling station. But remember, in a pinch you can always just press that button and run on gasoline, anyway. So: Are you ready to pitch that petrol and become a gasoline-free boater? All of these options provide realistic ways to reduce your carbon footprint, and in some cases, the drain on your bank account. Now, if only some smart powerboater could find a way to harness the power of the wind… by Lenny Rudow
Chesapeake Bay News