A few years ago, renovations were underway at Eastport Yacht Club (EYC) in Annapolis. Part of the renovations included the construction of a "living" wave attentuation breakwater, under the dock around the perimeter of the marina. The wave wall is a series of stacked concrete slabs that create shelving areas for oysters to be grown. As a pilot project, several concrete triangles were seeded with oyster spat and placed on shelves along EYC’s A and C docks in 2012. 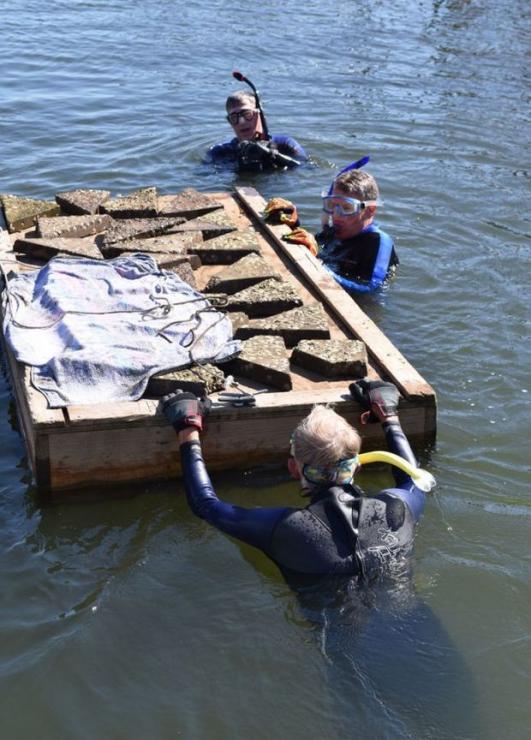 This summer, EYC entered into an agreement with the Chesapeake Bay Foundation (CBF) to collaborate on a multi-year effort to build the oyster reef at EYC. CBF’s Oyster Restoration Center in Shadyside, MD, ‘seeded’ 52 concrete triangles with oyster spat and subsequently ‘nurseried’ the oysters for several weeks in the adjacent creek. CBF established its Maryland Oyster Restoration Center (ORC) in 2002. According to CBF, the ORC houses several large tanks for use in producing juvenile oysters, called 'spat.' These setting tanks are loaded with oyster shell, and then filled with Bay water. Oyster larvae, usually produced by the University of Maryland's Horn Point Laboratory, are then released into the tanks. After a few days, these larvae attach, or 'set,' onto the old oyster shells, at which point they are called 'spat.'

The ORC is also home to CBF's restoration vessel Patricia Campbell. The 60-foot boat transports and places hatchery-produced seed oysters onto sanctuary reefs throughout Maryland waters and carries oyster shell and other materials for reef construction. The ORC serves as the central location for all of CBF’s oyster restoration activities in Maryland. On September 8, all 52 triangles were installed on the shelves on Docks A and C of the wave wall. After that was complete, divers brought up several triangles from previous plantings which were covered with mature oysters. This clearly demonstrated that the marina breakwater could effectively support oyster growth.