Novice aquaculturalist Christian Schou knew farming oysters would be a lot of work. But he didn’t count on putting his life on the line all for the sake of his newly-hatched South River Suzies. 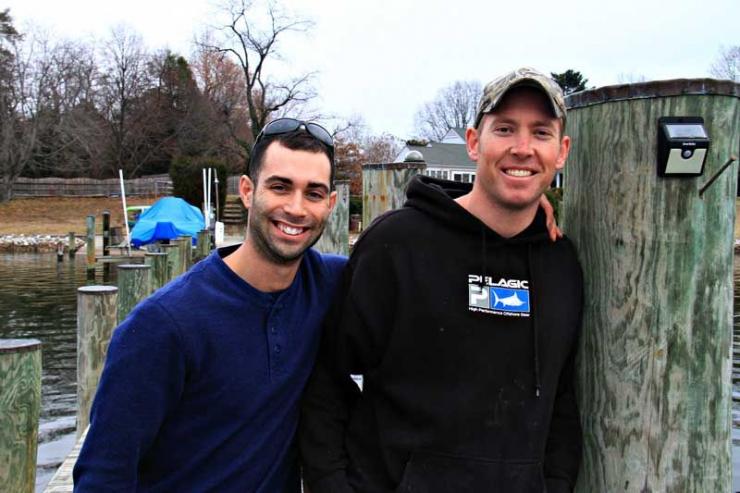 Here’s how the 28-year-old fireman from Annapolis tells it: “My partner Perry Summers and I had just finished pulling hundreds of thousands of oyster seeds out of our Harness Creek Hatchery. We had to move them to our other facility at the end of Melvin Road off the South River because the water temps in the creek were approaching 90 degrees. Those oysters needed to get into some cooler water. And fast.”

“Just as we turned into the river, we saw a squall headed right at us. In a matter of seconds, the wind whipped up three-foot rollers which pretty much submarined our 25-foot pontoon work boat. Then, the lightening started to dance all around us. I looked at Perry. He looked at me. We reckoned being in an aluminum boat pushing a not-very-seaworthy ‘barge’ full of baby oysters was not the place to be in the middle of a ginormous electrical storm. But we had to make it to shore with our ‘babies’ or we’d lose the year’s production. We were lucky. We got tied up just as the worst of the storm passed… Oysters saved and a big lesson learned.”

Christian credits his fireman’s training for escaping disaster during the storm. “At the Academy, they teach us to improvise, adapt, and overcome. And that’s just what we did to get home safely.” That’s been pretty much the rule and not the exception for Christian and Perry in their three-year-old oyster farming venture.

Christian (he’s the blond, talkative one) and Perry (slightly shorter, taciturn) met a couple of years ago on their respective days off. Christian was a fireman and engine driver serving at Firehouse 26 in Montgomery County; Perry was a U.S. Coast Guardsman Damage Control specialist stationed out of Baltimore. “We bonded over our love of hunting. And after a bunch of time together and probably more beers than we care to remember, we hatched this crazy idea of growing oysters from seed on the South River,” says Perry. Thus started a nearly year-long quest to learn everything the duo could about raising oysters; selecting a site for their hatchery operation and a five-acre lease off the South River’s Turkey Point; and obtaining the necessary approvals from the Department of Natural Resources. The two pooled their resources and came up with enough money to get their business off the ground. “People told us it would take a couple of hundred thousand dollars to get going. We did it for a fraction of that cost,” says Christian.

They were able to shave costs by designing and building their own upwelling system for their hatchery operaton, bending wire to form their own grow cages, and converting a cement mixer into a “tumbler” for a fraction of the cost of a commercial tumbler. “It takes about 14 months for our oysters to get to the three-inch size we need to be marketable,” says Perry. “That first year, we had some losses due to the high temperatures in Harness Creek. But all in all, we had a very successful grow-out.” The company they formed, the Great American Oyster Company, is on stream to produce a significant quantity of salable oysters as they go into the 2008-19 season.

The two reckon that it would take annual production in the neighborhood of 200,000 oysters to make their company a significant player in the local marketplace. “In the meantime, we are having a blast figuring all this out,” says Christian. “We are working outdoors, doing something we like, producing a product people seem to love, and giving back to the Bay. It just doesn’t get much better than that.”

Can the duo use their new-found business to attract female companionship? “Not so much,” says Perry. “We haven’t found many girls who love oysters and beer the way we do. Besides, our clothes get pretty stinky from working all day in the South River mud.”

The grow-out process the two entrepreneurs follow is continually being refined. It starts by putting the microscopic seed oysters into 55-gallon drums fitted with 1000 micron screens. These are suspended in their home-built floating hatchery either in Harness Creek or in the South River itself and are continually bathed in river water with the help of an upweller (which is nothing more than a converted bubbler). When the oysters are about the size of a fingernail, they are moved into a series of mesh bags, each successive bag holding fewer and fewer oysters until the “babies” are large enough to be transferred to three-by-four-foot cages. These 300- to 400-pound cages are then placed in the pair’s leased ground with the help of a winch. Each cage has legs which keep the cage off the bottom of the river. 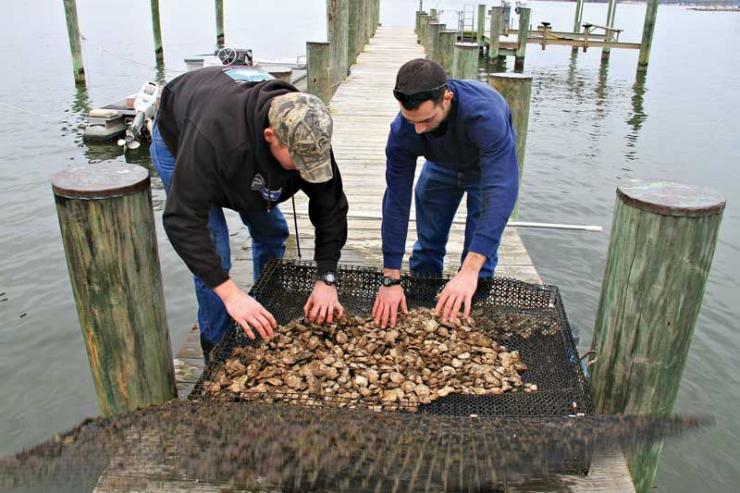 Initially, Christian and Perry handled their oysters three to four times per week, pulling them up, washing them off (with either a 1-3/4 inch firehose or a pressure washer), and often tumbling them in their converted cement mixer. “Our goal was to keep the oysters clean, reduce the mud the oysters would ingest, and produce a deeper cup which we know our customers would like.” Turns out, they were handling their oysters too much. “It was a love, hate kind of thing,” Christian says. “The oysters like to be cleaned off, but all that time handling them stunted their growth.” Now, the pair pulls the oysters up every week or so and let the sun and South River breezes clean the oysters without much manpower involved. The result is a slightly salty, buttery oyster with a deep cup and an astonishingly uniform and clean shell.

Annapolis Seafood market manager Tom Jockel is enthusiastic about the product. He says he was looking for a local oyster to add to his company’s selection. “And the boys came along at just the right time. We did a nice business with them for most of the fall. Then, the supply petered out. We still have people asking for them. I am sure when this year’s production comes in, we’ll carry them again.” Annapolis Seafood Markets retails about 3000 to 4000 oysters per week most weeks, many times that number around the holidays.

Christian and Perry named their oysters South River Suzies, an homage to Suzie Davis from whom they lease dock space for their oyster hatchery. How does Suzie like being honored with a brand of bivalves? “It’s kinda fun,” she says, “although I don’t like to eat them raw. I’ll leave that to my husband.” Both Christian and Perry know they are a topic of conversation among the watermen on the Bay. “They leave us alone,” says Christian. “We don’t bother them. They don’t bother us; although I know a lot of them think we’re crazy.” After devouring a plateful of South River Suzies, this reporter would beg to disagree. These guys are crazy… like a fox.

Follow the progress of Christian and Perry on their Facebook page facebook.com/GAOCMD. The pair anticipate being able to provide Annapolis Seafood Market with plenty of Suzies starting in the next month or so.

Story and photos by Craig Ligibel