John Todd of Easton, MD, describes himself as a “self-taught amateur.” That may well be true, but he turns out some very professional looking boats from his tidy, well-equipped shop tucked away in the farming country west of Easton. Todd is working on his third-generation electric powered boat.

Miss Wye, his second creation, was on display at the Antique and Classic Boat Society Festival in St. Michaels and is the current champion and record holder in her class in the annual Wye Island Challenge race, also known as the Electric Boat Marathon. The race, run by the Miles River Yacht Club (MRYC), is now in its 16th year. The marathon runs 24 miles, down the Miles River, into the Wye River, around Wye Island, and back up the Miles, finishing at MRYC.

I asked why he was interested in the evolving technology of electric boats. Todd’s answer will be familiar to all backyard garage tinkerers: “It is still a wide open field,” he replied. “The big money hasn’t taken over yet.”

At the 2015 marathon, Team PropTalk’s Electrashell finished in “limp-home mode” according to skipper Charlie Iliff, who remained unfazed and enjoyed the post-race awards dinner at MRYC as usual. He says, “There are few waterways around to compete with the Wye for pleasant boating.”

This year’s race is scheduled for September 30, 2016 with the first start at 10 a.m. The race is open to all electric-powered vessels with three classes for monohulls and two for multihulls. For more information about the Electric Boat Marathon, go to electricboats.org/2010-Wye-Island.html. 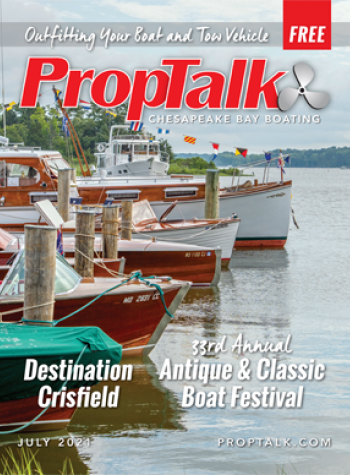