Custom Boats: Pushing the Envelope with the Composite Yacht 55

Perched on the banks of the Choptank River, Composite Yacht (CY) has a reputation for building strong, light, and fast boats. According to CY’s Rob Hardy, this reputation was, at least in part, why this owner reached out to them. “The owner is an accomplished sport fisherman, has owned several production boats, and knows exactly what he wanted in this boat. In addition, he wanted to work with a small company where the builders would share his enthusiasm for the project.” 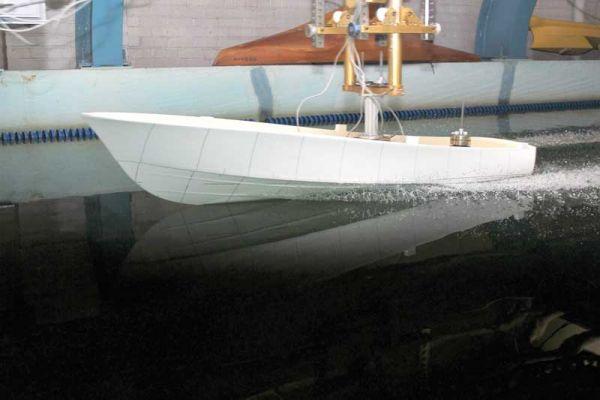 The owner’s list of requirements includes a traditional Chesapeake profile; conventional inboard power with shafts and props; no pods, jets, or surface piercing drives; and most important, a minimum top end speed of 50 knots.

“We have several traditional Bay designs in our line up, but the classic deadrise hull just is not up to that speed requirement,” Rob explained. So they went to naval architect Lou Codega who is well known for fast powerboat designs. “Lou did all the math and worked out the ratios to see what size the boat needed to be to sustain those speeds. He drew a very traditional looking hull from the waterline up and assured us that at 55 feet she would support the power needed to meet the speed requirement.” The next step was to find out what that power requirement would be.

“We don’t usually do tank testing. With our existing, moderate speed designs, we know what they can do from long experience, but this is a new situation; we are definitely pushing the envelope on a traditional design with a conventional drive train. So, we built a model and went to the Davidson Lab at the Stevens Institute of Technology in Hoboken, NJ, to find some answers. The tank testing confirmed that the hull would attain the design speed. The testing also generated numbers indicating the amount of drag or resistance the hull produced at speed. The results were encouraging. The drag numbers indicated a power requirement in the range of 4000 horsepower,” Rob said.

“So where that leaves us is with a need to identify a propeller maker who can craft a wheel that can deliver that power to the water efficiently and ensure that the hull meets the design speed. We have several options, and I think we are about to decide on a manufacturer. As soon as we do that, we can communicate the details about the prop pockets and shaft tunnels to the team working on the hull mold. ”

In the meantime, the project is moving forward on several fronts. “We are working with a company in Virginia called ATI to develop the mold for the hull. We decided that the boat was just too big to go the conventional route of building a plug and then building the mold over it. ATI is building what is called a temporary, limited use, female mold. The mold is constructed in sections by a computer-aided design program driving a CNC Foam router. The cradle and supports for the mold are being built now, and when the sections are complete, everything will be assembled here, most likely in our Cambridge plant because she’s too big to lay up in this building. Once the mold is assembled, our team will fair and smooth it and compare it with the drawings to verify that everything is accurate. This is not a completely new process for us; we used a similar, but modified approach in laying up the hull on our new CY47,” Rob concluded.

“As you can see, we are still very much in the design stages. We still need to make a lot of decisions about materials, layup schedules, vacuum bagging, resin infusion, and the like. We are doing a lot of research on materials used in the aerospace industries, many of which seem appropriate for this project.”

As Rob observed, they still have a lot of design work to do. “We still have to finalize the deck and accommodation layouts and come to an agreement on the appearance of the boat above the sheer line. At the end we will have produced a fast and pretty boat and learned a lot. The CY55 will no doubt become the basis for a new line of CY yachts. This hull is so efficient that for owners who don’t need to go quite so fast, a more moderate power plant should make for a very economical boat to operate.” For more information, click to Composite Yacht.