What is today known as the Norfolk Naval Shipyard, or Norfolk Navy Yard, was founded in 1767 as the Gosport Shipyard in Portsmouth, VA. In 2017, it will be celebrating its 250th anniversary. 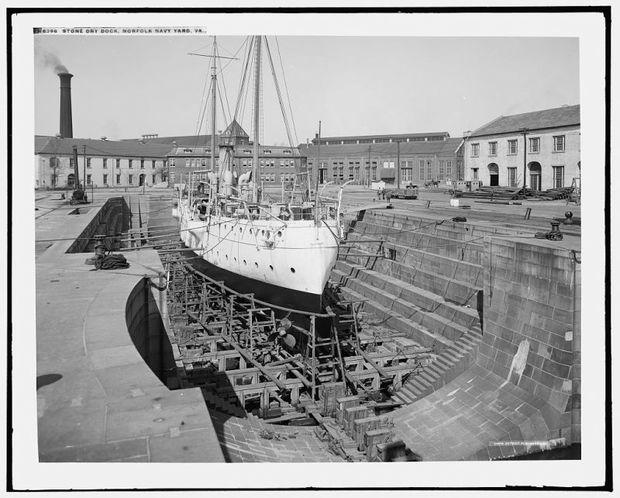 The shipyard was established by Andrew Sprowle, a merchant, on the western shore of the Elizabeth River under the British flag. For a time it prospered, but when the American Revolution began in 1775, Sprowle fled, choosing to remain loyal to the British. The newly formed Commonwealth of Virginia confiscated the property and took up operations, but the shipyard was burned by British troops in 1779. It was later rebuilt, and in 1794 the United States Congress passed “An Act to Provide a Naval Armament,” which allowed the federal government to lease the Gosport Shipyard from Virginia.

The first ship built for the U.S. Navy in Gosport was the USS Chesapeake, a sister ship of the USS Constitution and one of the original six frigates authorized by Congress. In 1827, construction began on Dry Dock One, the first functional dry dock in the Americas. It is still operational today and is listed as an historical landmark in Portsmouth, VA.

The American Civil War broke out in 1861 with Virginia joining the Confederate States of America. Shipyard commander Charles Stewart McCauley ordered the burning of the shipyard, fearing the Confederacy would take control of the facility. But before it could be burned, the Confederates did in fact gain control and confiscated a tremendous amount of war material, including heavy guns.

On April 20, 1861, just days after Virginia seceded and before evacuating the Gosport Shipyard, the U.S. Navy burned the frigate Merrimack to the waterline and sank her to keep her from falling into the hands of the Confederates.

By 1862, the Confederacy was in desperate need of ships and managed to raise the Merrimack from the depths and rebuild her as an ironclad war ship. It was in the Gosport Shipyard that they built the ironclad CSS Virginia on the burned hull of the USS Merrimack. During the Battle of Hampton Roads, also known as the Battle of the Ironclads, the CSS Virginia sunk two ships—the USS Congress and USS Cumberland, and came face-to-face with the USS Monitor for the first time. Neither side claimed victory in that battle, and after returning to Gosport to make repairs, the Confederates burned the shipyard in May 1862.

Union Forces reclaimed the shipyard in 1862, and its name was officially changed to the Norfolk Naval Shipyard for the county in which it was located.

During World War I and World War II, the size of the Norfolk Navy Yard was greatly expanded. At its peak during World War II, 43,000 personnel were employed and nearly 30 major vessels were built. The yard also repaired 6850 U.S. and Allied ships. Its last two ships were christened in 1953 during the Korean War when the shipyard began making the transition from a shipbuilding facility to an overhauling and repair facility. The Norfolk Naval Shipyard is the U.S. Navy’s oldest shipyard.