Since the 1920s, crab skiffs were used by watermen to catch and sell soft-shell crabs. During the prohibition era, they were used by rum runners to stealthily offload liquor from delivery vessels. Today, they have become a popular race boat on the Chesapeake Bay. We recently sat down with one such racer, Pete Ginocchio, who builds and competes in crab skiff races each summer. For more info on the history of the Smith Island Crab Skiff, click to proptalk.com/smith-island-crab-skiff-always-race-boat. 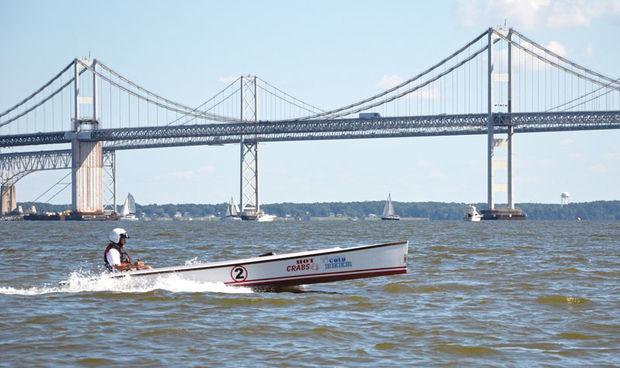 How did you get involved with crab skiff racing? A fishing buddy of mine called to say there were some restored buyboats being shown in nearby Urbanna, VA. We went out there and found there were two Smith Island Crab Skiffs on display as well. We had never seen or heard of a crab skiff before, but became interested right away after speaking with the two owners who told us about the association and the boats. We agreed we would each build a skiff, so we joined the Smith Island Crab Skiff Association (SICSA), and got the class rules and the drawings from the boat museums. Shortly after joining SICSA, I was invited to drive a spare boat at an event in Oxford, MD. That’s all it took, and I was hooked! I ran the loaner skiff “back of the pack” but gained some valuable knowledge about what it took to win and what hull characteristics were important. The association members were friendly and very helpful. I started construction of the boat in the fall of 2010, and it was ready for the season’s events in 2011. That said, it took all season to get it “dialed in.” The next season it became pretty competitive, and my racing life got a lot easier with just going to the race locations and running without having to do all the between-race testing. In the third season I began to visualize some ways I could build the boat better, make it lighter, and reduce drag. At the end of the season I sold the boat and now have to compete against it. I later talked a good friend of mine, Dr. Robert Macleod, who really knows woodworking and has a great shop full of tools, into helping me build a new crab skiff. We had a goal of making it lighter, and it came out to be 100 pounds lighter than my first boat; weight and drag is important when you have an engine power limit of only 20-hp. Making the second boat was a lot easier since I had learned where to buy the wood, fiberglass, fasteners, and such things for the first boat. We launched it for the 2015 season. [gallery type="square" link="file" size="medium" columns="2" ids="17561,17562"] What is the name of your boat? Hot Crabs, Cold Beer. I call my race team “Old Codger Racing” since I am the oldest member of the skiff association at age 78. How many crab skiff events do you participate in throughout the year? The association schedules about a half dozen events where the boats are run in front of spectators and a couple of events where the boats are simply on display. I try to participate in all the events, but this past season I had too many schedule conflicts to make more than about half. In-water events are held in locations all around the Bay, usually in conjunction with some weekend festival being held there; for example The Cape Charles Clam Slam, the Crisfield Crab Derby, the Oxford Cardboard Boat Races, and the Sultana Downrigging Weekend in Chestertown. Is there one race that really sticks out in your mind? I guess the most memorable (for an old guy like me) has to be the most recent one! That was the Sultana festival which was held over Halloween weekend this year. The weather was sunny and cool, but the wind came up and blew right down the Chester River resulting in some fairly big waves. To make our competition closer and the outcome more in doubt, we start our events in a single file, the slowest boats up front progressing to the fastest in the back. We started on the front stretch headed into the wind; I was in the back of the pack and held my position while trying to find anyplace to run that might be smoother. There was no smooth water anywhere in that river, but the backstretch was more tolerable in that the wind was from behind and the waves were moving with you. I followed the pack around the entire first lap but had to get going as the race was only two laps. I starting passing boats in the first and second turns and ran down the balance of the others going down the backstretch. As my boat picked up speed on the backstretch straightaway, it began to bounce along the tops of the waves with the prop starting to come out of the water. At the end of the backstretch I hit a particularly large wave, and the prop shear pin failed and I came to a stop in the third turn with all my friends passing me on the way to the finish. Fortunately, one came back after he finished and pulled me to the dock. [gallery type="square" link="file" size="medium" ids="17564,17566,17565"] For more info on the Smith Island Crab Skiff Association, click to their Facebook page here.
Powerboat Racing