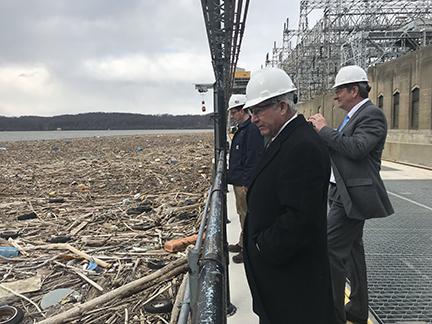 The visit was prompted by a number of photos and comments circulating on social media showing mounds of refuse filling the water, and an outcry from the public about what is being done about it. Also, concerned about environmental issues downstream, McCarthy contacted Exelon for some answers, and with good reason. Looking to your right as you drive across the dam into Harford County, gives you a live, up-close look at the pond behind barrier and what Exelon has to contend with, and it's not pretty.

"Last week, it looked way worse," explained Bryan Bennett, general manager of Exelon at the Conowingo Hydroelectric Station. "This week, it's still not great, but it has sort of spread out against the wall of the dam so it's not as obvious as you're driving over, but it's a lot smaller than it was last week."

The debris has been a bigger issue this year due in part because Exelon has been faced with an increased amount of flows. Bennett identified 22 days of spills (the term used when the crest gates are opened) which is more water than the generators can handle. To put that number in perspective, typically, the first quarter of the year would bring anywhere from 0-10 days of spills. This year, melting ice, precipitation, and flooding have resulted in added flows, and with that more debris.

"The pile that is trapped behind the dam is actually a good thing," Bennett emphasized. "That's the debris that clamming operations will take care of." Clamming involves the use of a crane to scoop the debris out of the water and move it to dumpsters placed along the top of the dam. As the dumpsters are filled, they are moved to Hopkins Cove where the contents are sorted. The wooden debris (mostly trees, limbs and stumps) gets chipped and then hauled offsite. With eighteen 20-yard sized dumpsters that have already been filled so far this year, the issue is not that Exelon isn't concerned about cleaning up the refuse; it really just comes down to safety.

"This debris is something that we are impacted by equally as much. This is causing us operational issues as well. When you've got this much stuff just coming up to the dam, it's not something we can ignore," stressed Deena O'Brien, manager for regional communications for Exelon.

"I think the general consensus out in the public is that we're just not doing anything about it. And, unfortunately for safety reasons, we just can't put a skimmer boat in the water right now. We've got highly turbulent waters. In addition to that, we had high winds last week so trying to pull up a 30-foot log out of the water in high winds, isn't feasible. We've been in spill conditions for 22 days. When you're in spill conditions, it's unsafe, so we're limited to what we can do until safety conditions are improved. However in the moments that we can, we're out there actively working to clean-up the debris."

Reiterating O'Brien's comment, Bennett added, "Our policy with our skimmer boat is that we don't put the skimmer boat in the water until after the spill season, which typically begins in mid to late April, because even if we stop spilling today, at any given time, we could have to lift the crest gate and go in to spill and it just creates an unsafe condition."

Social media feedback from the public prompted a discussion about why the skimmer boat isn't being used. Aside from the safety issues already mentioned, Bennett explained that the skimmer boat, at roughly 40 feet long, is mostly useful in retrieving the smaller rubbish, making it less efficient. "We will put the skimmer boat out there for days and we won't get nearly as much as we do with the crane. The crane is much more effective."

McCarthy, seemingly surprised, learned that Exelon also employs divers to go into the water when they're getting ready for a flow. "Part of the reason we clam is to get the debris out of from in front of our trash racks. We have to go in and put our head gates in so the divers will actually go down and make sure all of the debris is clear in those areas," Bennett added.

Exelon recognizes that communicating with the public has been an issue and are considering creating an informational video and ramping up efforts to get an educational campaign out so the public can better understand that the issues are not being ignored. Clean-up days are scheduled and there are plans to boost efforts even after the clamming and skimmer boat operations are started.

"We also have some other things going on along the (Susquehanna) river. We're partnering up with the Lower Susquehanna Heritage Greenway with Delegate Mary Ann Lisanti (District 34A) and her efforts. In early June, there's a clean up day that's going to extend from Peach Bottom down to Conowingo and then we're even talking about adding a third one," O'Brien said. "The general public does not understand what the movement of that body of water is, and that while the debris does increase, from day-to-day, that debris field moves; it expands and it contracts and it looks worse to the general highway using public than what it actually is so educating everyone would be beneficial," added Brooks. 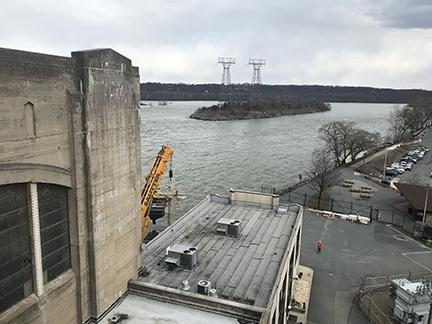 The County Executive, accompanied by Wein, Roberts, and Brooks, was given a tour of the inner workings of the hydro-facility as well as the platform, where the group got a first-hand look at the magnitude of the clean-up operation. "This visit was very educational and I understand what's going on better now," said McCarthy.

"No one wants to see the debris floating in the water, but we also do not want to risk any injury; when conditions become safer, the clean-up will commence. The fact that it all collects there really is a good thing; otherwise, it would be going down the Susquehanna in large volumes with every opening." Bennett assured the County Executive, "The debris is trapped there and it's not going anywhere until we get the chance to move it."

As stated on their website, Conowingo Hydroelectric Generating Station is a power plant owned and operated by Exelon Power. The Conowingo Dam, which began operating in 1928, uses the flow of the Susquehanna River to power 11 turbine generators to produce 500 MW of electricity. The dam can be used to stimulate the electric distribution system in the event of a failure of the PJM (Pennsylvania, Jersey, Maryland) Connection.