Capt. Brandon Meshey, the new owner of TowBoatUS Chesapeake City, a 24-hour on-water towing and assistance service for recreational boaters, has been a Chesapeake Bay boater for the majority of his life. He says the business will keep him closer to the Bay, but what really led him to this line of work was his desire to help others in need. 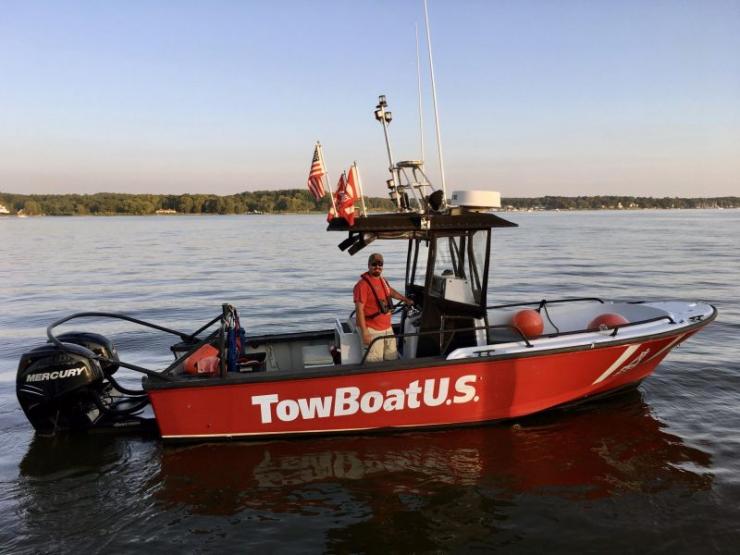 “Becoming a TowBoatUS owner has allowed me to combine my passion for boating with helping people who may be having a bad day on the water,” said Meshey, whose towing ports are part of a nationwide network of over 300 TowBoatUS locations. Much like an auto club for boaters, BoatUS offers TowBoatUS on-water Unlimited Towing Memberships for saltwater boaters and anglers for $149 per year. Boaters without BoatUS towing services face costs that average $750 per towing incident, with some paying into the thousands out of pocket.

While the bay is federally designated as ‘navigable,’ there are plenty of shallow spots that often cause boaters to run aground, making it essential to have access to Meshey’s professional on-water assistance provided by US Coast Guard-licensed captains. “We now have one full-time local captain and several part-time captains at each port, providing greater coverage for boaters in the area,” added Meshey. Meshey’s fleet includes four response vessels with red hulls and bright white TowBoatUS name and logo on their sides. The boats are rigged for towing, jump-starts, fuel delivery, and soft ungroundings. Separate from BoatUS on-water towing services, the company also provides salvage services such as refloating sunken boats.

Meshey is in the process of upgrading to a 20-foot salvage trailer to expand his capabilities even more this boating season. Boaters can reach any of Meshey’s TowBoatUS ports by hailing on VHF channel 16, by calling the company directly at (410) 885-5988, by phoning the BoatUS toll-free 24/7 Dispatch Center at (800) 391-4869, or via smartphone using the new BoatUS App. More information can be found at BoatUS.com/Towing.