According to the Maryland DNR, the northern snakehead is a native of the Yangtze River basin in China.  "It can reach over 33 inches in length and tolerate a wide range of temperatures (32-85°F). This fish prefers stagnant shallow ponds, swamps, or slow moving streams and rivers with mud substrate and aquatic vegetation." Snakeheads have the ability to breathe air, allowing them to survive out of the water for several days if their skin remains moist. https://youtu.be/UX2hdtZeWFo Because snakeheads can survive out of water, it is said that they can "walk" on land. While not actually walking, snakeheads do move on land but the specifics of their movement are not fully known. To remedy that, the Maryland Department of Natural Resources is helping Noah Bressman, a Ph.D. candidate at Wake Forest University, in his study of northern snakeheads’ mysterious locomotion. “The department was excited when Noah requested to study overland movement of northern snakeheads,” Fishing and Boating Services Biologist Joseph Love said. “We were happy to support his thesis research by providing him information on snakehead biology and management, obtaining specimens, and providing him laboratory space to conduct his research.” With the ability to remain outside of water for days, the northern snakehead can traverse most terrain. Unlike other fish species, like the mudskipper, which use their fins to propel them forward out of the water, the northern snakehead does things a little differently. “(Northern snakeheads) make almost the same movements as soldiers,” Bressman said. “Soldiers crawl by moving their leg and opposite arm to move.” 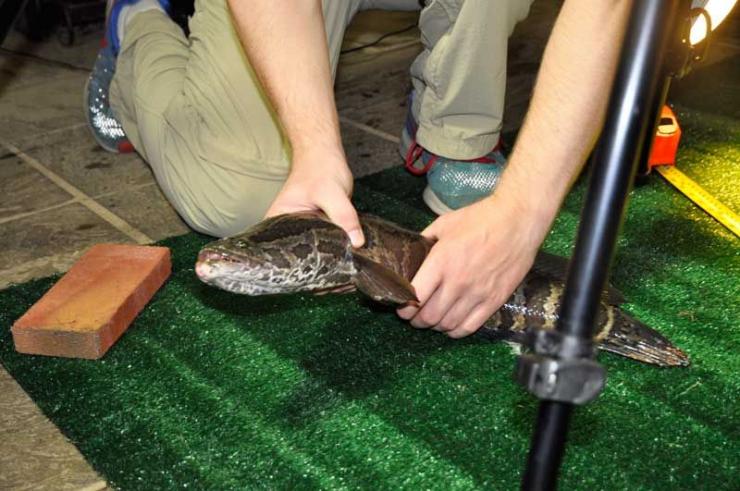 Northern snakeheads do this by moving their back fin and head in opposite directions propelling them forward. Yet, the muscle movements that snakeheads use to traverse terra firma has not been fully understood. Bressman has studied nearly a dozen northern snakeheads, adult and juvenile, captured by the department for scientific study. The fish are placed on a large piece of artificial grass, with a dozen or so electrodes recording the fish’s slightest movement, while overhead videos record and still photographs capture its path. While this creature is well-known to be voracious in the water, once on land, it’s much more timid and even lethargic. Bressman describes the northern snakehead’s behavior on land as “ambitious,” but it will take a lot more time, research, and analysis before any conclusions can be made.
Chesapeake Bay Fishing
Chesapeake Bay News