Calvert Cliffs State Park in Lusby, MD, is a popular place for fossil hunting. But the region looks very different today than it did when those fossils first began accumulating. 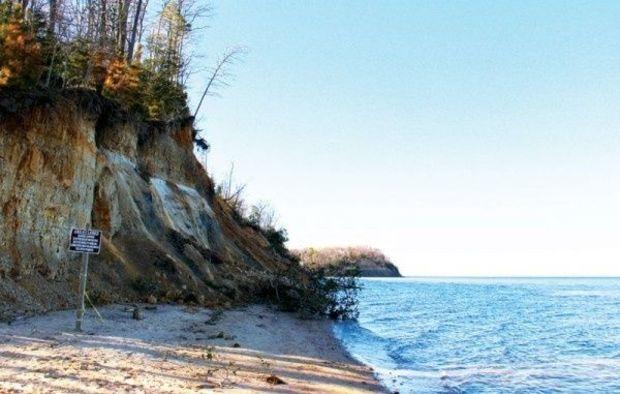 Between 10 and 20 million years ago, Southern Maryland was covered by a shallow, temperate sea, bordered by low sandy shores, tidal marshes, and freshwater swamps. When the sea receded, cliffs were exposed and began to erode. These massive cliffs, stretching to 100 feet high in some places, now dominate the western shore of the Bay for roughly 24 miles in Calvert County. As the cliffs erode, they reveal the remains of prehistoric species and constitute the most complete section of Miocene (fossil) deposits in the eastern United States.

Over 600 species of fossils from the Miocene era have been recovered from the cliffs over the years. Common finds among amateur collectors are scallops, mollusks, oyster shells, and sharks’ teeth. Remains of whales, porpoises, dolphins, and sea cows have been found, indicating that there was once free access to the open sea. Sharks and rays were also found in abundance, as evidenced by the number of teeth and dental plates recovered. Crocodile teeth were found on occasion, as well as the remains of marine turtles and land tortoises.

More surprisingly, the skeletal remains of land fauna such as tapirs, rhinoceros, mastodons, horses, and dogs are sometimes found. According to the Maryland Geological Society (MGS), “it is quite probable the Bay was fed by freshwater streams and rivers; therefore during floods or seasonal rains these animals could have been swept downstream from their natural habitat. On the other hand, the animals may have been mired in the swamps or trapped at the foot of banks by high tides.”

But don’t expect to find a mastodon bone the next time you’re at Calvert Cliffs State Park. Most beach goers are lucky to find a shark tooth or fossilized shell. To distinguish a fossilized shell from a present-day form, the MGS notes that fossilized shells are usually thicker and are chalky white or gray. Modern shells are more colorful and are often glossy.

Fossil hunting is permitted at the open beach area at the end of the red trail, but due to the danger of landslides caused by cliff erosion, climbing upon and walking beneath the cliffs is prohibited.