The Fish don't have a chance. The Boston Whaler Outrage series is loved by anglers and despised by fish across the world. Dear fish: it’s about to get worse. The all-new 330 Outrage was at our very own Annapolis Powerboat show in October, and it incorporates some new design changes that will have scaled critters swimming for their lives. Before we look at what’s different, let’s review what remains the same: construction. Like all Boston Whalers, the 330 Outrage has a glass-foam-glass sandwich that’s been pressurized to fill each and every cavity. Hardware is all 316-L stainless-steel, hinges are recessed, wiring is multi-strand tinned-copper with heat-shrunk, epoxy-glued connections, and hatches are made in two-part molds so they’re fully finished on both sides. Have no worries, Whaler fans, the ruggedly built unsinkable tradition continues. Same goes for the deep V-hull design, which incorporates a 23-degree transom deadrise. Put the design and construction together and you’ll be punching through a steep Chesapeake chop with ease. And speed, too. A pair of 350-hp Verados on the transom will propel the 330 Outrage to an outrageous 53 miles per hour, and at a reasonable 4500 RPM cruise, the 330 slices along in the upper 30s. 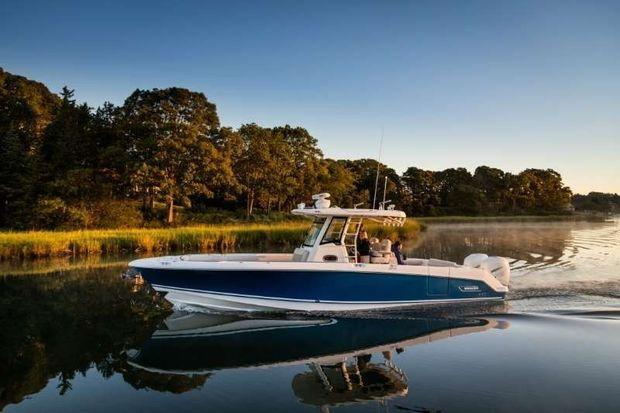 Of course, if you’re familiar with modern Boston Whalers, you already expected beefy construction, good seakeeping, and zippy performance. What aren’t you expecting? Take a close look at the bow cockpit of this boat. The forward V seating has been radically changed to incorporate a svelte U-shaped lounge in the forepeak. Meanwhile, the forward console seat is both longer and wider than the norm, so it becomes more of a mega-lounge than a seat. Folding arm-rests, molded in cupholders, and all-around grab rails cap it all off. Net result? The bow becomes an excellent lounging/sunning/entertainment area with just as much seating and space as a center console with traditional forward seating, yet it actually has more fishing room. Icing on the cake: Whaler also puts gunwale-mounted rodholders up there. Second layer of added sweetness: open the forward console seat and you’ll discover a set of gigantic rodracks big enough to hold a tackle store’s worth of rods and reels. The stern cockpit is more or less status quo, the one exception being the leaning post. On the back it has a large aft-facing seat, the back of which folds down to become a table. You can have stowage underneath or an optional 40-gallon livewell. (There’s a standard 50-gallon well in the transom). It’s a nice arrangement, and although it does limit the tackle compartments and rigging stations many center consoles of this size place in this spot, I have to admit I love the idea of having a table that doesn’t sit on one of those wobbly pedestal mounts. Besides, if you like your leaning post more fishing-oriented, you can opt for a different version which houses tackle drawers, a cutting board and sink, and a Yeti cooler. If entertaining is more your speed, there’s an optional “summer kitchen” which swaps out the tackle stowage for an electric grill with a 1500-watt inverter. Some other comfort-boosters include a console head compartment with vacuum-flushing head, a sink, and opening port; a 40-gallon freshwater system; a fold-down transom bench seat; a tempered glass windshield with a power-actuated vent; and a port-side dive/boarding door and removable ladder. Add in a few more options such as the bow and cockpit sunshades, the premium JL audio system, and the bow filler cushions, and it’s pretty darn easy to turn the 330 Outrage from a fishboat into a cocktail cruiser. Wait a sec—let’s not get carried away here, folks. Even if you dress up the 330 for entertainment value, it will remain eminently fishable. Yes, it does have a pair of 57-gallon insulated, integrated fish boxes. Of course, it has under-gunwale rod racks and a total of eight gunwale-mounted rod holders, plus a trio flush-mounted in the transom. Absolutely, coaming bolsters line the cockpit. And, did we mention that the boat comes with a standard windlass, plow anchor, 25 feet of chain, 200 feet of rode, and a forward anchor wash down? Yes anglers, there’s a good chance the 330 Outrage will win your heart. And we’re sorry, fish—but you’d better start swimming. The base MSRP on the 330 is $247,761. Specifications: LOA: 33' 1" Beam: 10' 2" Draft: 1' 8" Displacement: 9,000 lbs Max HP: 700 Fuel Capacity: 300 GAL. by Lenny Rudow
Boat Reviews
Chesapeake Bay News