Few boat builders have been around as long as Bertram, but it’s been decades since this company turned out a new model that managed to turn heads. One look at the Bertram 35, and you’ll know that this long dry spell is over. We can’t say if this model will resurrect the company or not, but when it comes to turning heads there’s no argument—the new Bertram 35 is one of those boats that causes traffic jams on the dock. 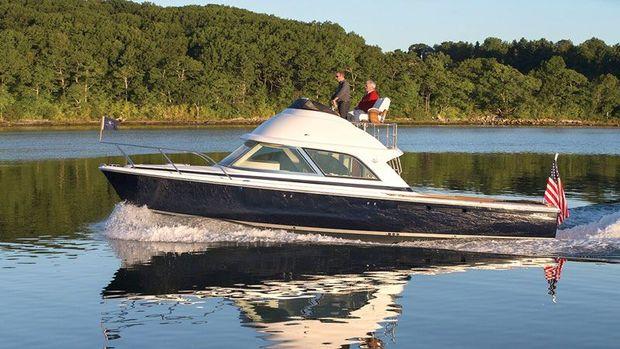 The curvaceous flybridge incorporates the classic Bertram 31’s looks and lines, while the unbroken sheer and squared-off transom evoke memories of any number of Bertram’s past models. Yet at the same time, the boat (designed by Michael Peters) somehow manages to look modern. This is especially true in the cabin, which features a contemporary interior which again mixes curves and straight lines. The first eye-grabber down below is a radiused forward bulkhead, and the second is the angular galley with ultra-modern fixtures. The contradiction works.

Looks are, of course, a matter of personal preference. So, let’s just pretend for a moment that you’re unimpressed by the Bertram 35’s appearance. Fine. There’s a lot more to talk about with this boat, starting with the fact that a pair of 507-hp Caterpillar C7.1 diesel inboards drives her to a top end of almost 40 knots. Credit goes to the boat’s svelte nature, which is the result of a vacuum-infusion hull, Divinycell-cored hullsides, a structural grid bonded to the hull with methacrylate, and the use of Kevlar construction in critical areas. Added together these modern construction methods bring down the weight of the 35 by about 10 percent as compared to the last time Bertram built a 35-footer. 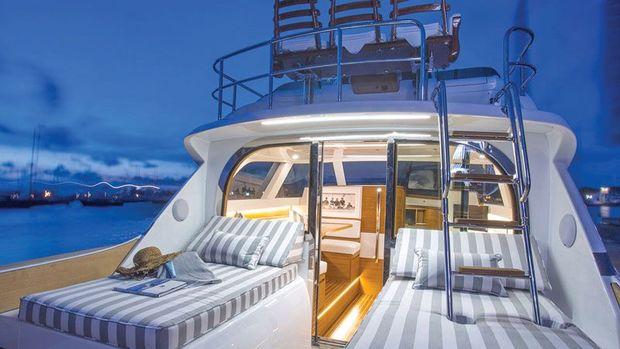 As for many other construction touches, the semi-custom nature of this boat makes it quite difficult to nail down generalizations. Engine access, for example, is roomy in the stock boat. But if you opt for the Seakeeper stabilization and a genset, it becomes rather cramped. Or consider the cockpit sole, which can be traditional teak, faux teak, or simple shiny fiberglass. You can get the boat decked out with a full-blown tuna tower or in picnic-boat trim with an open flybridge and no sort of top whatsoever. The list of choices goes on and on, and what you opt for will obviously have quite an impact on the boat’s uniqueness.

While the 35 may be based on a fishing-boat design, and certainly could be used while wetting a line or two, it tilts more toward day-cruiser than fisher. It does have a livewell in the transom and fishboxes integrated into the deck. But it also has raised motorboxes which act as sunpads forward in the cockpit, another nod to classic Bertram design. These enhance comfort, but negate the ability to build in the cockpit units (such as bait freezers and rigging stations) found in hard-core fishboats. Then again, do you really want to mar those gorgeous teak covering boards and designer fabrics with fish blood and chum? We didn’t think so. 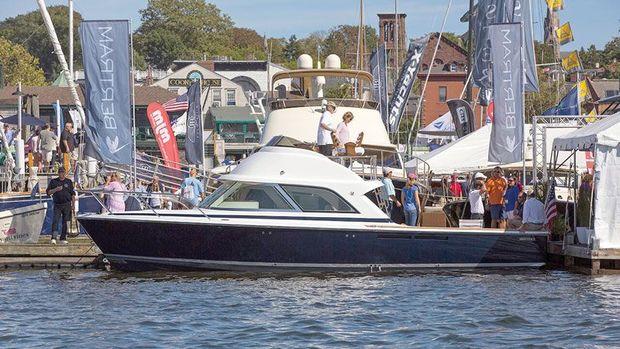 Another indication of how the boat will be used in the real world can be seen in the open cabin layout. The forward offset queen berth isn’t shut off from the rest of the cabin by a bulkhead and door, but is instead left open to the salon. Only the head is fully enclosed and separated out from the rest of the cabin. While it’s true that this means overnighting will be for couples only, it also means that the entire cabin, surrounded 360 degrees by glass windows and doors, always feels open and airy. For day boating, the arrangement is tough to beat.

If you’re on the hunt for a drop-dead gorgeous day boat that has the ability to handle casual fishing as well as cocktail cruises, and the brawn for runs through thrashing seas, the new Bertram 35 might just fit the bill. You’ll have no problem spotting her at the fall boat show, either—just look for the biggest traffic jam on the docks.