You still think of Beneteau as a builder of sailboats and trawlers? Get over it. Their line of powerboats is about as comprehensive as it gets, and one that’s making some fresh waves is their mid-sized express cruiser, the Gran Turismo 38. 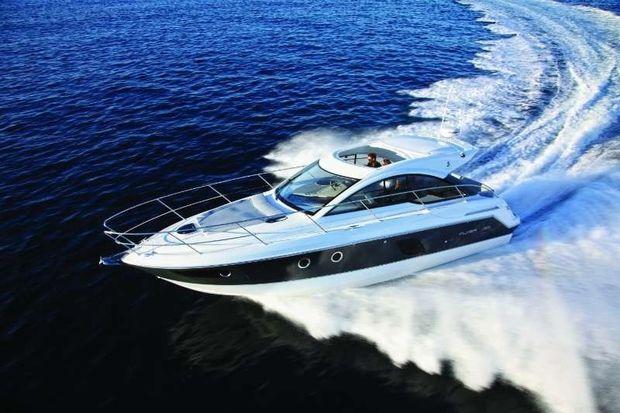 One thing I like about the entire Gran Turismo line, the 38 included, is that these boats are surprisingly spry and efficient when compared to the competition. They tend to be powered with engines that are a bit smaller than other similar-sized boats carry, yet they still hit comparable or faster cruise and top-end speeds.

On the 38, that means you can hop across the Bay at just over 30 miles per hour while getting 1.5 miles per gallon. Crack open the throttles, and you’ll see a top-end pushing 40 mph. As a point of comparison, I averaged up the cruising speed miles per gallon of the closest three competitors I’ve tested in the past year, and came up with 1.2 mpg. That’s a significant difference. And even with their larger powerplants, those competitors posted very similar cruise and top-end speeds.

There are several reasons why the Gran Turismo 38 posts better efficiency numbers, but they boil down to two main factors: weight and hull design. The 38 tips the scales at 16,204 pounds. But all of those competitors? They break 20,000 pounds.

When it comes to hull design, the 38 employs Beneteau’s Air Step hull. It works in a similar fashion as a stepped hull, but instead of carving notches in the bottom, Beneteau pipes the air in via hullside vents that terminate in the boat’s bottom. Getting that air under the boat aids in efficiency (by reducing the amount of friction between the hull bottom and the water), but it also nets the boat a handling boost. Crank the wheel over hard, and it turns faster and easier than you would expect.

Some will also argue there’s a seakeeping advantage, as the boat rides with a bit of an air “cushion” under the hull. In my experience, though you can’t really quantify the sensation, it’s quite real—take a Gran Turismo 38 for a sea trial, and feel it for yourself. While you’re taking that sea trial, note how comfortable it feels to sit at the helm of this boat. Unlike most expresses this size, the helm is on the centerline. Visibility is great all the way around. Since the helm seating is double-wide, and there’s another passenger’s chair to starboard, the captain can remain in the social flow as he or she runs the boat.

Also note just how easy it is to do the actual running; Beneteau puts joystick controls coupled to stern drives on the Gran Turismo 38. That means squeezing into tight slips or pulling up to the fuel dock is going to be a piece of cake. If you haven’t run a stern drive boat with a joystick just yet, all I can say is that you’ll be shocked at how much easier it makes close-quarters maneuvering.

While it’s refreshing to find an express cruiser that places an emphasis on performance, in order to make today’s boater happy it also has to “perform” in the comfort department. In the saloon, like many modern expresses, the 38 accomplishes this by providing you with an indoor/outdoor environment. Yes, the helm deck is enclosed under a full hard top, but it has a gigantic sunroof and side windows that open to let in salt breezes and sunshine. The cockpit has a huge port-side U-shaped settee that converts into a sun lounge, and there’s an aft-facing chaise lounge on the starboard side. Belowdecks there’s a two-berth full-beam mid-cabin under the helm-deck, a queen berth stateroom forward, and a saloon between the two.

Here’s the trick that makes that cabin feel like an indoor-outdoor area, too: it has a big overhead skylight, and multiple portholes along the sides. Remember when being in the cabin of a boat like this felt like being in a cave? Forgeddaboudit—there’s enough natural sunlight streaming in that you’ll never fumble for a light switch. Of course, there’s also a galley down below. But if you want to maintain the outdoor-loving nature of this boat, you’ll opt to add the grill and refrigerator to the outdoor wet bar. This turns it into more of a mini-galley and keeps food prep out in the open.

Okay: are you ready to get hit with some numbers? The 38 starts at a hair under $360K. Load it up with options, and you could break the $400,000 mark. Which, incidentally, doesn’t eclipse those competitors that the Gran Turismo out-performs. Considering the other perks this boat provides, you might say it simply out-shines those others—inside and out.