It’s pretty rare we get to see a boat this unique, folks, so pay attention: the new Bayliner XR7 is unlike anything we’ve seen before. At its core, the XR7 is a deckboat. A big deckboat, too, that has been designed to deliver room and convenience akin to a pontoon boat. But at the same time, its mission is also to deliver the advantages of a traditional fiberglass hull. Wait a sec—the hull this boat rides on is anything but traditional. Yes, the XR7 maintains the deckboat/pontoon boat mix, but it does so overtop of Bayliner’s Element “M” hull design. 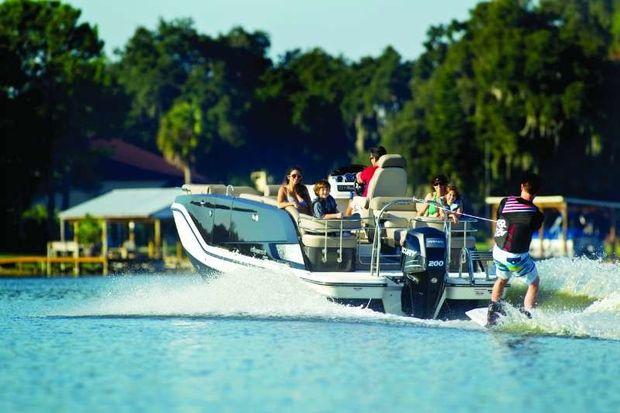 We first looked at this design when we reviewed their Element XL, an 18-foot long bowrider, exactly one year ago. For those of you who don’t remember, here’s a quick refresher: it’s essentially a mix of tri-hull, V-hull, and powercat, which appears to have an “M” shape to it when viewed from the front. It’s extremely stable and very efficient, though as you might expect, it can’t slice waves open in the same way as a deep-V.

Now consider the fact that the XR7 is 25 feet, six inches long and eight feet, six inches wide. That’s quite a bit larger than previous Element hulls, and as you boaters surely know, what works in an 18-foot boat does not necessarily work in a boat more than seven feet longer. So, what happens when you slam down the throttles and start zipping across the bay on an XR7? Surprisingly, the same things that happen on its smaller siblings.

I’ve spent at least 10 or 12 hours on this boat, in two different locations with very different conditions, and would sum up its characteristics exactly as I would with the 18-footer: stable, efficient, and smooth in a small chop but bumpy in bigger waves. One other quirk to be aware of is a tendency for the prop to blow out in sharp turns, especially if you give the engine any trim.

A pontoon boat, of course, has a long list of quirks of its own, which is why deckboats like this can be so appealing. And in this regard, the XR7 does deliver. The footprint is almost as wide at the bow as it is at the stern, opening up acres of deck space for seating and entertaining. The boat can hold 16—yes, 16—people, and there’s comfy seating for at least a dozen.

Two layouts are available, one with an aft L-lounge and a second with twin port and starboard center-facing aft lounges. In both cases, the bow carries a pair of center-facing lounges. Plus, the XR7 provides a few perks that pontoons can’t match: a molded glass head compartment hidden inside the console; large center lockers for water skis and wakeboards below the deck; and “fences” made of fiberglass (instead of the usual aluminum fences found on pontoon boats, which tend to rattle and vibrate underway).

Performance is pretty spiffy, too, especially when compared to your average pontoon. The boat comes with a stock 150-hp Mercury Four-Stroke, which can be upgraded to a 200- or 250-hp Mercury Verado. The 150 Four-Stroke cruises the boat in the upper 20s and hits a top-end of 38.7 miles per hour. I haven’t run an XR7 with 250 horses but considering how good its performance with stock power is, I wonder if any more juice is really necessary. You say nothing but the maximum horsepower will do? I get it, but note that jumping from the 150 to the 250 is a $12,000 upcharge.

Speaking of upcharges: the XR7 starts for $39,999, which sounds like a great deal for a new boat of this size with a 150-hp outboard. And at that price it’s not what you’d call stripped, either. Things like a 120-watt stereo, bimini top, and tilt steering are all considered standard features. But there are a few options such as the portable MSD ($357), bow platform boarding ladder ($214), and ski tow bar ($500), which the vast majority of us are going to want. Then add in stuff such as dealer prep and shipping, and what you’re realistically looking at is $45,000 or so. Still, that’s a lot less than most boats that have this much size and power. And none of those competitors—be they pontoons or deckboats—come with that M-shaped hull. So, is this boat really all that unique? You might say it’s… elemental.