March 6-8, 1962, one of the 10 worst storms of the 20th century (in the U.S.) struck the Mid-Atlantic coast. Its impact was so powerful that the U.S. Weather Bureau gave it a name: The Great Atlantic Storm. It is also known as the “Five High Storm” because it lingered off the Atlantic Coast for a period of three days, and five high tides. But today, its most common name is the Ash Wednesday Storm of 1962, because in most areas the worst damage occurred on March 7, Ash Wednesday. 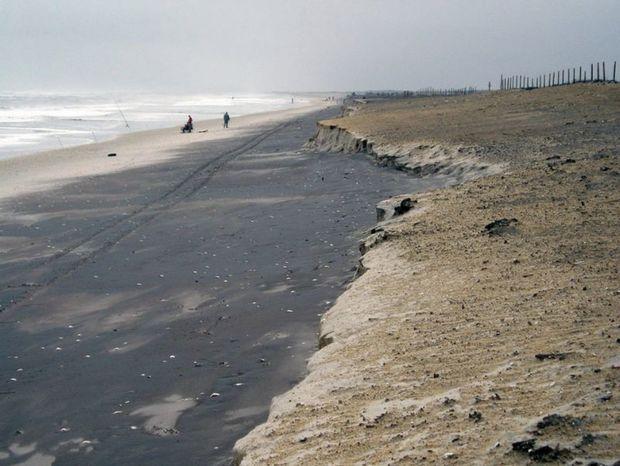 The powerful nor’easter was caused by two intense pressure systems off the coast and coincided with the spring equinox, resulting in exceptionally high tides, heavy rains, and hurricane-force winds. According to the U.S. Geological Survey, the strong northeast winds, broad fetch, and high angle of wave approach caused record flooding and beach erosion from New England to Florida. The storm killed 40 people, injured more than a thousand, and caused hundreds of millions in damage across six states.

Many homes and businesses along North Carolina’s Outer Banks were completely destroyed. In Virginia Beach, waves broke the concrete sea wall, and further inland the cities of Norfolk and Hampton Roads were completely inundated with water. At the mouth of the Bay, construction on the Chesapeake Bay Bridge-Tunnel was two years in, and much of the partially completed work was undone during this storm. A custom built pile driver, worth $1.5 million and known as “The Big D,” was also destroyed.

In Ocean City, MD, winds raged at 70 miles per hour and waves as high as 25 feet pounded the shores. The high tide during the peak of the storm was about nine and a half feet above the normal low tide. The National Weather Service reported that both Chincoteague and Assateague Islands were completely underwater. On Assateague Island, the Chincoteague Fire Company lost a portion of its herd of wild ponies.

Misty, the pony made famous by the children’s book “Misty of Chincoteague,” survived by being brought inside her owner’s home after the barn flooded. Shortly after the storm subsided, Misty gave birth to a foal named “Stormy.” A little known fact about Assateague Island is that during the 1950s, what is now National Park Service land was originally zoned for resort development. There could have been 5000 private lots on the island, but the Ash Wednesday Storm halted any plans for development and destroyed the few existing structures. Remnants of Baltimore Avenue, the once main thoroughfare on the island, are still visible today. After the storm, Assateague was deemed too dangerous to inhabit, and the land was sold to the federal government.

Farther north, sand dunes along Delaware’s entire coastline were flattened, and part of the iconic Steel Pier in Atlantic City, NJ, was ripped apart. Inland, the weather front off the coast brought crippling snow to mountainous regions; the Shenandoah Valley received two feet. Snow fell as far south as Alabama, and temperatures across Florida dropped to freezing. In many places power was out for several days.

The Ash Wednesday Storm caused an estimated $200 million in damage, equivalent to about $1.5 billion today. What made this particular nor’easter so deadly was that it sat on the coast for three days, allowing more and more water to pile up. During the aftermath, measures were put forth to try and minimize damage from a future storm. Large sand dunes were constructed along the coast, beaches were replenished with sand, and new building standards, such as raising oceanfront homes, were put into place.

Today the Mid Atlantic coastline is far more developed then it was during the 60s, so should a similar storm occur in the future, we can only hope we will be better prepared.