The Maryland Department of Natural Resources has released the results of the 2018 Blue Crab Winter Dredge Survey, which shows that the population of blue crabs remains healthy and sustainable. 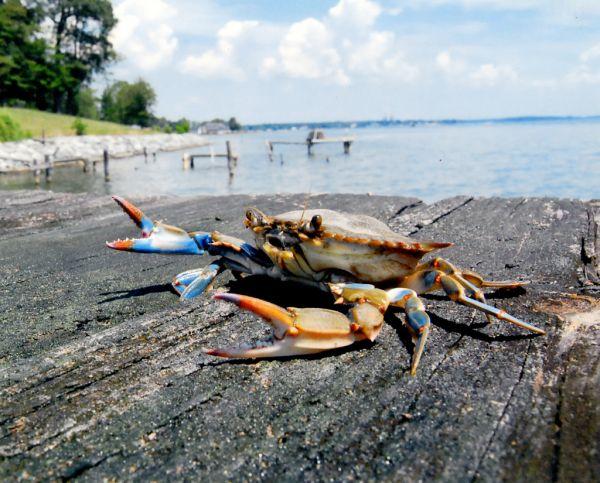 While this year’s cold weather and ice cover took a toll on the adult crab population, causing an estimated 35 percent mortality of adult females wintering in state waters, the number of young crabs that returned to the Chesapeake Bay this year increased 34 percent. Blue crabs spend the first part of their lives in the Atlantic Ocean before returning to the Bay to grow and mature.

“Despite the cold, hard winter, which extended well into the spring, the blue crab population remains healthy, resilient, and sustainable,” Maryland Natural Resources Secretary Mark Belton said. “Even with the erratic weather, which included snow in April, the blue crab population remains well within parameters, showing that the state and our partners are managing the species well.”

The survey indicates a Bay-wide crab population of 371 million, a decrease from last year’s estimate of 455 million, driven largely by a decrease in the number of adult crabs. In 2018, the spawning female stock decreased 42 percent from 254 to 147 million, dropping below the target level of 215 million, but remaining well above safe levels. This year’s adult female abundance remains among the 10 highest of the nearly three decade old survey. Adult male crab abundance declined 23 percent from 76 to 59 million. The juvenile crab population increased 34 percent over last year, reaching 167 million.

“Although the number of spawning-age females is down from last year, we are pleased to see that their abundance is well above the minimum safe number even with the winter weather and lackluster reproduction last year,” Chesapeake Bay Stock Assessment Committee Chair Glenn Davis said. “Last year we had very few young crabs entering the Bay. Those juveniles grew through 2017 and endured this year’s cold winter to become the 2018 class of spawning adults.”

The decline in numbers of adult crabs in the Bay may lead to a slow start to the early harvest season, but as young crabs enter the fishery and increase their abundance in midsummer, Maryland may see an improved late season. The 2017 Bay-wide crab harvest decreased slightly in 2017, from 60 to 54 million pounds, but continued to operate at sustainable levels, especially for female crabs.

“This year’s results give us optimism that our management approach is effective at conserving adequate numbers of crabs even when the number of juveniles is low and winter mortality is high,” Maryland Fishing and Boating Services Director David Blazer said. “We will continue our conversations with industry and partners throughout the season to ensure a successful and sustainable harvest.” The Chesapeake Bay Stock Assessment Committee plans to release a full analysis this summer.

The annual Winter Dredge Survey has been conducted by the Maryland Department of Natural Resources and Virginia Institute of Marine Science since 1990. In the survey, biologists use dredge equipment to capture, measure, record, and release blue crabs at 1500 sites throughout Chesapeake Bay from December through March.