Packed into just 16 feet and seven inches, this 1964 Boston Whaler center console is quite the classic. Despite her 53 years, she still provides great boating adventures just like a new boat. Actually, in many ways she’s better than new. All her hardware is mounted in a reinforced manner, so it doesn’t rattle; the blue fiberglass cockpit is not just shiny but flawless, and her hull finish is the same. Her center console stands proud in highly finished mahogany that features the engine controls, switches, and other accessories. She is a true fishing center console with a full flat cockpit floor. 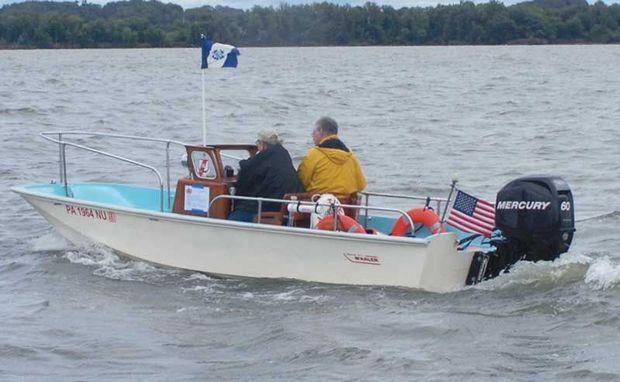 Her owner, Dr. Daniel J. Benny (Ph. D.), is the author of several books. He bought this boat and its trailer from Long Level Marina on Lake Clark in York County, PA. When he bought her, Doc had the marina put on a new 60-horsepower Mercury outboard along with a transom jack plate. As do many new outboards, it starts every time, idles smoothly on this rig, and gives a good punch—around 37 mph in calmer weather.

At a recent Antique and Classic Boat Society event on Lake Clark, I was eager to take a ride in this Boston Whaler despite the rough conditions. Launching at this marina is assisted with a tractor and crew to get the boat to float deep enough on its own trailer while the skipper is dry behind the helm and ready to drive the boat free. Doc and I were already seated in his boat—we climbed aboard while the boat was still trailered on dry land.

We were two big men in a small open boat during this test ride. I relied on the hardware to both board and get out of the boat. To understand the significance of that mounted hardware for me, let’s talk first about at least six wood pieces built into the hull and deck fiberglass sections while the boat is built in sistered hull and deck molds. That wood is in the transom, under the deck, and also under the hull as needed to bolt and screw the hardware, seat, and console to the fiberglass that makes up the center console control station, deck, and hull. In a few places, that wood has sister metal plates to mount the handrails in a sandwich manner (wood under the fiberglass and extra metal fittings outside the hull to spread the load). It should be categorized as military grade construction based on my experience using it.

The first Boston Whalers were fiberglass boats with low hull sides, a design that works well thanks to the Whaler’s very stable hull shape. In fact, that stability is a calling card of early Whalers. They were neither trimaran nor catamaran designs.

Instead, they were modified Hickman Sea Sled designs. Hickman had a 1914 patent granted for his inverted vee hull, which describes it. He created a new hull shape with two sharp points. Unlike a catamaran, the hulls were not separated by a flat center section. Hickman’s were inverted vee hulls that met in the middle at the bow and made for a shallow vee at the stern.

Dick Fisher (who was running another company at that time) and C. Raymond Hunt (a naval architect) added that third vee without the flat sections that a trimaran has. Just three points of a vee. This original hull shape came after much testing and long before a mold was made. The mold came in late 1956, and the first 13-foot, four-inch boats were produced in model year 1958. The first 16-foot, seven-inch model was complete in 1961.

Integral to what makes a Boston Whaler special are the fiberglass skins of the hull and deck, filled with poured-in expanding foam that replaces typical stringers between the deck and the hull. Dick Fisher began to conceive this design breakthrough back in the early 1950s.

How did Doc’s boat perform that day with white caps on the lake? Although we got soaked going into them, we stayed dry going with them. The boat was extremely stable. And remember, this is with two big men in a 16-foot, seven-inch by six-foot, two-inch boat!